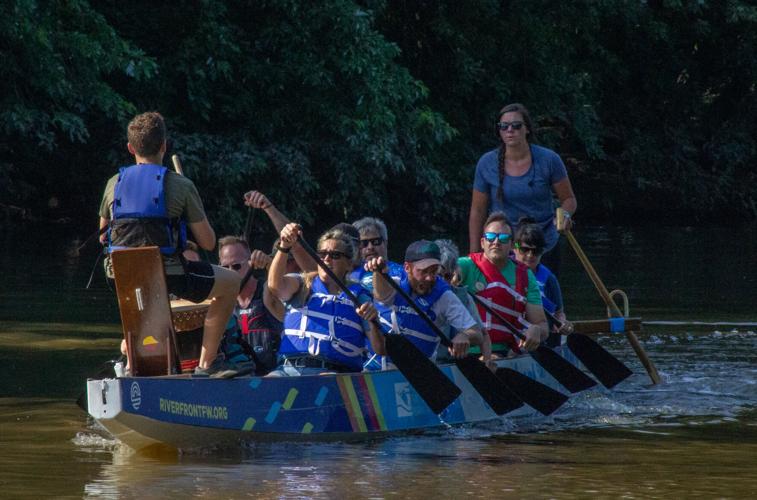 The Fort Wayne Parks and Recreation dragon boat crew, the Park Paddlers, row in sync during a practice session at Guldlin Park. 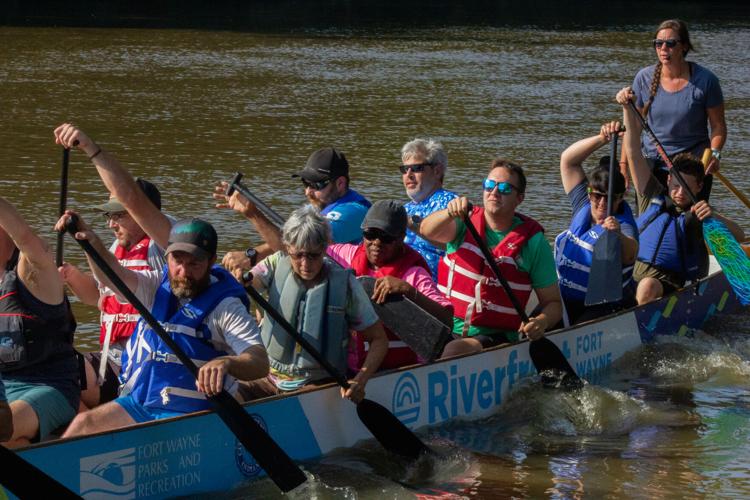 The Park Paddlers get ready to push off from the dock in their Dragon Boat during a recent practice session at Guldlin Park. 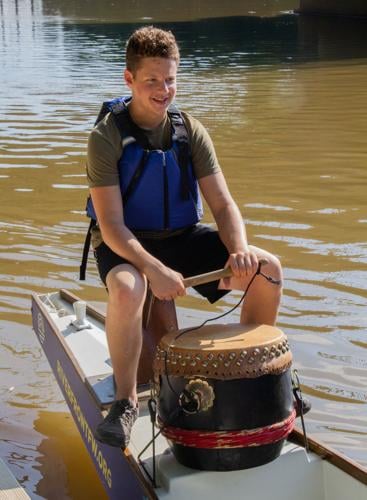 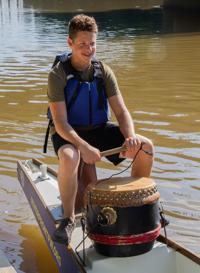 Charlie Reddinger, son of Chuck Reddinger, deputy director of recreation for Fort Wayne Parks and Recreation, sits at the front of the boat to beat the drum that helps ensure the paddlers remain in sync.

The Fort Wayne Parks and Recreation dragon boat crew, the Park Paddlers, row in sync during a practice session at Guldlin Park.

The Park Paddlers get ready to push off from the dock in their Dragon Boat during a recent practice session at Guldlin Park.

Charlie Reddinger, son of Chuck Reddinger, deputy director of recreation for Fort Wayne Parks and Recreation, sits at the front of the boat to beat the drum that helps ensure the paddlers remain in sync.

After a couple of party boats pull away, an airboat is launched and a kayak makes its way past the public access launch at Guldlin Park, it’s finally the dragon boat’s turn to slip into the water.

On a recent Thursday afternoon, about a dozen members of the Park Paddlers met at Guldlin for practice. The Paddlers are Fort Wayne Parks and Recreation’s dragon boat team, and though the boat doesn’t have its dragon head attached for practice on this day, it’s still quite a sight to see being backed down the park’s boat ramp toward the river.

After being launched and brought to the park’s dock, members of the team take their places – a drummer in front, the steer person in back, and everyone else two-by-two down the vessel.

Steerer Eden Lamb, wearing a microphone headset, calls out an order when everyone is settled. “Left side: Give us a little push!”

The boat moves slightly away from the dock, giving the crew room to move in the water.

“Paddles up!” Lamb commands. The crew immediately jerks their paddles into an upright position perpendicular with the river.

“And away,” Lamb continues. Paddles slice into the river’s surface, and the boat starts moving west down the St. Marys.

The team is preparing for the dragon boat races that will be a centerpiece of “River, Set, Go!” at Promenade Park this weekend.

Chuck Reddinger, deputy director of recreation for Fort Wayne Parks and Recreation, has been part of the event from the start. He is a paddler with the department’s team but says you don’t have to be part of the races to enjoy yourself. The entire “River, Set, Go!” event is a great way for people to enjoy the river, he says by phone.

Teams can check in tonight at Athlete’s Village at Promenade Park, but things really get going Saturday morning. The opening ceremonies begin at 9:15 a.m. at the park at 202 W. Superior St. with a performance from the Fort Wayne Chinese Families and Friends Association and the traditional “dotting the eyes” ceremony with Mayor Tom Henry where eyes are painted on a dragon head that gets attached to one of the long, narrow boats.

The races begin at 10 a.m. when several heats will determine which of the eight teams will compete in the afternoon’s finals. As spectators watch from vantage points throughout the park, teams will race between the Historic Wells Street Bridge and the Harrison Street bridge at the other end of Promenade.

At 1 p.m., the teams take a lunch break and members can compete in contests such as the drummers’ dance-off and eating spicy ramen. For the latter, teams can pay to have Sriracha added to their competitors’ bowls or have the hot sauce removed from their own.

The race finals follow lunch, and there is an awards ceremony at 3 p.m.

“This is a way of supporting that mission and bringing things like the sensory tents, or the free concerts or our free nature series for kids down there,” Reddinger says. The Calm Water Sensory Tent, a mobile sensory room, will be available at the park from 10 a.m. to 4 p.m.

Activities pick up again in the evening with floating yoga at 5 p.m. where the public can follow along with an instructor stationed on a platform in the river.

Music starts in the bandshell at 6:30 p.m. with local music group Caledonia. The band We Are Checkmark performs at 8:30 p.m.

Members of the public are invited to bring canoes, paddle boards and kayaks for the Paddle Parade through the park at 7 p.m. At 9:30 p.m., floating fire pits will be lit in the river for the finale.

Though Reddinger grew up around boating, sailing and other water activities in New England, he wasn’t familiar with dragon boats until the races started in Fort Wayne. Now he says it’s something he really enjoys, even though the racing can be intense with winners in a heat sometimes decided by slivers of a second.

To get a boat that is about 40 feet long and weighs hundreds of pounds (not to mention the weight of the crew) really going in the water takes technique and working as a team.

“When you are all paddling as one unit, it’s a pretty unique sensation,” Reddinger says. “… What you experience during a race is you have 20 people paddling in unison (and) you can actually feel the boat lift out of the water and get up on plane.

“That’s really fun to experience that.”

It’s no wonder that practice is a crucial component. The Parks Department team stays on the water for about an hour during each session leading up to the races.

At Guldlin on that recent afternoon, another member of the crew has arrived just in time as the dragon boat makes its way back past the dock. Lamb is counting steadily with the drum beats as the vessel approaches the launch point after turning around not far up the river.

Lamb is the department’s manager of Salomon Farm, outdoor recreation and boating.

“Let it ride,” she says as the boat coasts. It is brought up to the dock and the latest addition to practice is told where to sit to best balance the boat. Moments later, the vessel is pushed away from the dock and the steerer calls out again: “Paddles up, and away!”

As the boat cuts through the water, making good time away from the dock, Lamb’s voice echoes down the river in steady cadence.

Among commands you might hear on the river during the dragon boat races, according to Riverfront Fort Wayne's Captain's Manual:

• "Attention in the boat" – Gets the undivided attention of the paddlers.

• "Butts to the rail" – All paddlers position themselves against the outboard rail.

• "Hold the boat" – Paddlers put their blades vertically into the water and dig in to stop the boat's momentum.

• "Stabilize the boat" – Paddles are moved to a horizontal position with flat blades resting on the water.

• "Draw strokes" – Left and right strokes from the front or back few seats only. Paddlers on a specified side of the boat lean out and paddle sideways to move the boat sideways.

Reader Engagement Editor Corey McMaken is a Fort Wayne native and has been with The Journal Gazette since 2004. He writes about arts, entertainment, food and area history. He also works with social media, newsletters and other digital projects.