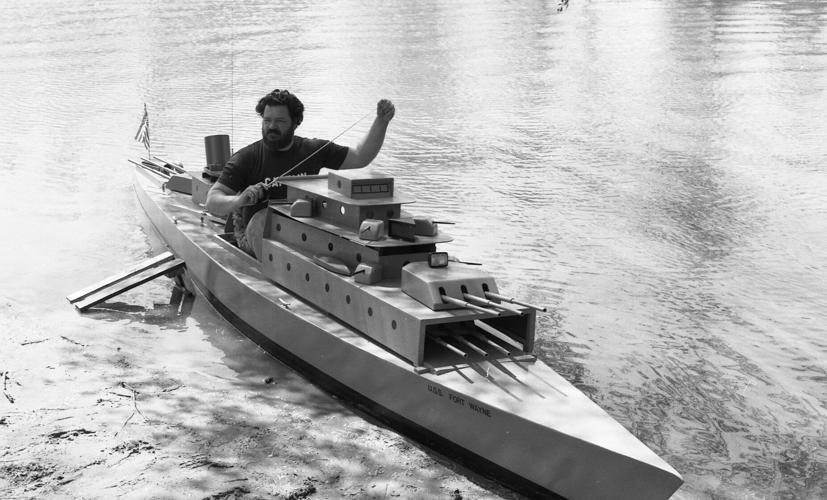 Steve Leuenberger, a kayak and canoe maker, built his U.S.S. Fort Wayne in his garage. The bridge and turret section could slide back to conceal him. 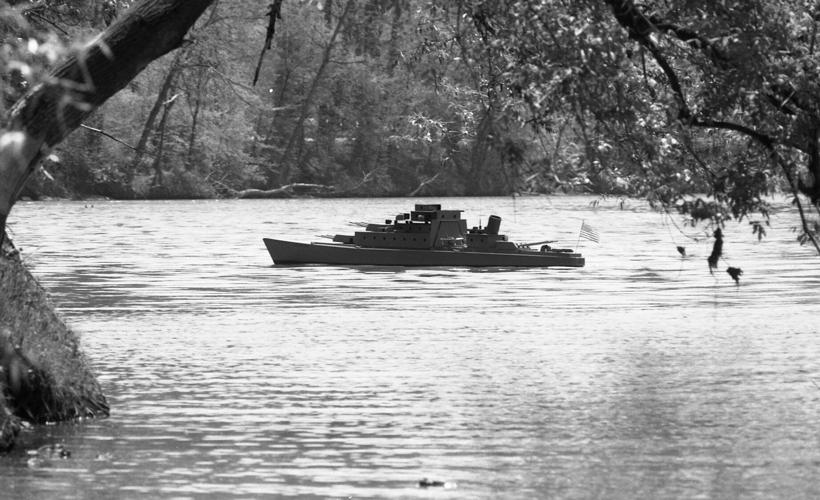 The 350-pound vessel travels down the St. Joseph River in Fort Wayne. 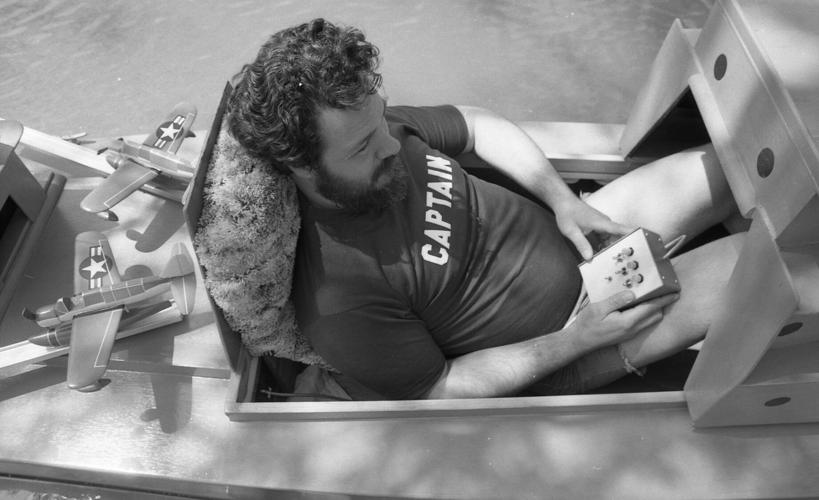 Steve Leuenberger could control his boat with a control box with four switches: On/off, high and low speed, forward and reverse, and left and right rudder. Behind him are models of two Kingfisher reconnaissance planes.

Steve Leuenberger, a kayak and canoe maker, built his U.S.S. Fort Wayne in his garage. The bridge and turret section could slide back to conceal him.

The 350-pound vessel travels down the St. Joseph River in Fort Wayne.

Steve Leuenberger could control his boat with a control box with four switches: On/off, high and low speed, forward and reverse, and left and right rudder. Behind him are models of two Kingfisher reconnaissance planes.

Several readers pondered how this craft fit into the Navy.

Terri Bruner of Fort Wayne wrote a caption from a sailor’s perspective: “I’m not sure this is what I had in mind when the Naval recruiter said I would see the world!”

“If these fish don’t start biting soon, I’m going to blast ‘em out of the water.” – Mike Wise, Fort Wayne

“After losing their navy to Ukraine, Russia is forced to launch a more trimmed down navy ship.” – William Royce, Fort Wayne

“Yes, I’m wearing it. Not sure how I’m getting out of it?” – Ellen Dalrymple, Fort Wayne

“Amid all this boating paraphernalia, you forgot one thing: a life jacket!” – Grace Bates, Fort Wayne

”It looked bigger in the pictures...” – Amy Thatcher, Fort Wayne

”There is more than one way to catch a big fish!” – Barb Limbach, Wolcottville

”I am off to the Black Sea to battle Putin’s gang. Wish me luck. – Mike Krafft

”This was the last rental boat, but now I wonder if it might require both a fishing and a hunting license.” – Kathy Schreck, Fort Wayne

”I just got tired of going fishing and not catching anything.” – Susan Tudor, Ossian

”When I joined the Navy, they promised aircraft carriers.” Jim McFadden, Fort Wayne

”Who said I needed a fishing boat to fish on this lake?” – Randy LaFrentz, Fort Wayne

The real story: Steve Leuenberger, a maker of canoes and kayaks, decided to make something a little bigger in his garage: a 350-pound battle cruiser. He started with sketches and constructed this boat that was a little over 20-feet-long. The U.S.S. Fort Wayne, as he christened it, got plenty of attention from onlookers as he traveled down the St. Joseph River powered by a motor out of a Chrysler.

For years, Steve Leuenberger has built canoes and kayaks. And as he constructed the small craft in his Stellhorn Road garage, he thought about building something bigger. A battle cruiser, perhaps. One day, he said to himself, “What the heck. Why not?”

And that’s exactly what he did. He built a battle cruiser – 20-feet, 1-inch long, and 3-feet wide – not from a kit, but from sketches he drew.

”I came close to the sketches,” he said in slow, soft tones that hint of shyness. “While you’re building, you say, ‘That looks about right,’ and you go on with it.”

He went on with it for about 18 months, and recently his USS Fort Wayne was ready to test in the waters of the St. Joseph River. The cruiser is seaworthy – not to mention an attention getter as countless curious riverbank passers-by can attest.

On another sunny afternoon made for sailing, the 40-year-old shipbuilder again was preparing to launch the watercraft at the Shoaff Park boat launch. His pride was clear as he explained the detail and various working parts of the realistic-looking miniature.

Made of quarter-inch plywood and painted battleship gray, the USS Fort Wayne is powered by a 350-watt, 12-volt blower motor out of a Chrysler.

The superstructure slides forward, enabling Capt. Leuenberger to slip into command control, where he operates the cruiser via a control box with four switches: on-off, high and low speed, forward and reverse, left and right rudder.

As he rests comfortably in his carpeted seat, he can move the cable-controlled three main gun turrets (two fore, one aft), sound a horn or communicated ship-to-shore with a CB radio. The captain’s quarters also include a rearview mirror, clock, compass and, he said, smiling and producing a single paddle, “auxiliary power supply.”

Two spotlights – one fore, the other aft – are operational as are the red and green running lights. The two Kingfisher reconnaissance planes, however, will not leave their launching pads nor will the six medium-range guns change position. The planes and two lifeboats, Leuenberger said, were carved out of pine two-by-fours.

There is one thing he’d like for his ship to have that it does now.

”I need a depth finder,” he said,” because I have run up on sandbars.”

Noting that the USS Fort Wayne has sealed bulkheads, he said, “I could actually take a hit in the side and not go down. I’m fighting submarines all the time.”

Grinning, he admitted his “enemy” is more apt to be man-eating carp than U-boats.

Transporting the 350-pound displacement craft from suburban garage to fighting waters is another mark of Leuenberger’s creativeness. Quite simply, the ship is put together in pieces. he places the hull atop his Dodge Omni, and the other parts are hauled to the launch inside the car. It takes about 25 minutes to take the cruiser apart and stow it on and in his car.

Asked if he’s always had a fascination for watercraft, he smiled as though enjoying a secret.

”What I’m really looking for is someone interested in building ships like this. I’ll tell them how.”

Waving his hand out toward the St. Joseph, he confided, “I want to go up and down the river with a whole fleet.”

With that, he climbed into command control, pulled back the superstructure and headed out to do battle with submarines off the shores of Shoaff Park.

To suggest a date or subject for History Journal, email Corey McMaken at cmcmaken@jg.net.

Reader Engagement Editor Corey McMaken is a Fort Wayne native and has been with The Journal Gazette since 2004. He writes about arts, entertainment, food and area history. He also works with social media, newsletters and other digital projects.