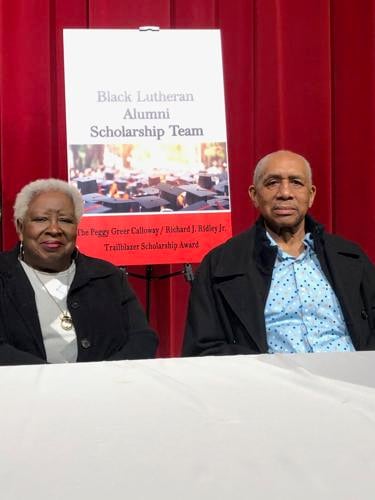 Peggy Greer Calloway and Richard Ridley, for whom a scholarship is named, were the first four-year Black students to graduate from Concordia Lutheran. 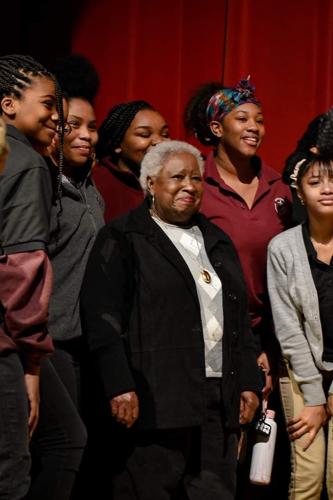 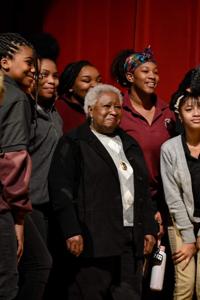 Peggy Greer Calloway at a Concordia Lutheran High School event. Calloway was one of the first four-year Black graduates from the Lutheran school.

Peggy Greer Calloway and Richard Ridley, for whom a scholarship is named, were the first four-year Black students to graduate from Concordia Lutheran.

Peggy Greer Calloway at a Concordia Lutheran High School event. Calloway was one of the first four-year Black graduates from the Lutheran school.

Sitting at the Fort Wayne Professional Firefighters Union, Richard and Roberta Ridley flip through a collection of mementos. Some are old Concordia Lutheran High School yearbook pages. Others are old newspaper articles. They all have something in common, though – Richard is the central figure.

Richard graduated in 1956 and said he had a positive experience at the local Lutheran school – he played football, basketball, baseball and ran cross country and track, but his heavy involvement in sports isn’t what made him special.

Richard was the first four-year, Black male graduate from Concordia and later went on to become the first Black firefighter in Fort Wayne.

“They both have created lasting legacies within their families at Concordia High School, with many of their children and grandchildren and relatives attending the Lutheran school system,” BLAST’s website said.

Roberta said she was approached by the nonprofit because of her work as chairwoman of the African American Genealogical Society. Roberta had kept a record of all monumental moments in Richard’s life, specifically his time at Concordia and with the fire department.

Michael Edmonds, BLAST president, said the team started as a “social gathering” organization for people who had attended Concordia. About 20 to 30 people gathered on a Friday night, and Edmonds asked Roberta to give the group background on Black Lutherans in Fort Wayne.

It wasn’t until the group started doing more research about the history of Black Lutherans in Fort Wayne that they found out Richard Ridley and Peggy Greer Calloway were Concordia’s first Black graduates.

“We just thought it was appropriate to honor them,” Edmonds said. “I mean, of course, they’re still living, but to kind of honor them because they basically paved the way, and they’ve had many of their family members go through the parochial system and Concordia.”

For the past 12 to 18 months, the group has focused on creating a scholarship for at least one graduating Black Concordia senior planning to attend college.

To be considered for the trailblazer scholarship, applicants had to maintain at least a 2.5 cumulative GPA and be in good academic standing.

They also had to submit a one-minute introduction video and either a 500-word essay, poem, artwork or song about how their education prepared them for life after graduation.

The majority of donations for the awards came from fellow Concordia alumni, Edmonds said.

“We’ve actually been able to reach out to like-minded folks,” he said, “people who are interested in helping kids out and furthering their education, who haven’t necessarily just been Lutheran.”

In early 2020, the organization created a Facebook group for Black alumni to join, and as of June 23, it had 217 members.

“People just signed up and signed on, and we’re continuing to grow,” Edmonds said.

This year, BLAST rewarded two students with the scholarship. Going forward, the nonprofit is looking to work with other like-minded agencies and create a “more formal fundraising platform,” he said.

While he has many plans for the organization’s future, Edmonds said he is pleased with what has happened in the first year and how BLAST has gained the community’s support.

“Just in talking to a lot of people, especially people who are in those areas where they’ve been interested in diversity and interested in helping (students) develop their educational goals,” Edmonds said, “they’ve just been so supportive, both financially and with advice and with connections.”

“I didn’t think I won anything,” Lee said. “I thought it was over, so when I got the call saying I won, it was very surprising.”

Lee heard about BLAST’s scholarship through Concordia’s announcements, and her counselor also recommended she apply. She said the application process was “pretty easy for the most part.” She just needed to set aside time to complete it and write the essay.

“I was definitely kind of nervous applying,” she said.

Johnson also said he was nervous about applying for the scholarship but thinks it has been great to win and help his parents pay for his school.

“I really thought I had a chance at winning,” he said, “but I just didn’t know how good my essay was.”

Both Lee and Johnson heard they won the scholarship after a call from Edmonds.

Jacob Pennekamp, Concordia’s head of school, said Lee and Johnson are both outstanding athletes and students.

“Even more, they have provided really good leadership in the hallways and in the classrooms,” Pennekamp said. “They are young people with great values who represent what this scholarship is all about.”

Pennekamp has been involved with BLAST since the group first presented the idea to the Concordia alumni office. He’s excited about its future and to see how it supports students’ potential and celebrates the school’s first Black graduates.

“Those names – Calloway and Ridley – are important names to Concordia because of how many people in their families are part of our Concordia family,” Pennekamp said. “This is going to be something we celebrate annually. And we look forward to celebrating students who embody what this scholarship is all about.”

Maya Wilkins is a Pulliam intern through the Hoosier State Press Association. She is a Ball State University student. She has previously covered the Fort Wayne area with The News-Sentinel and Fort Wayne Magazine.