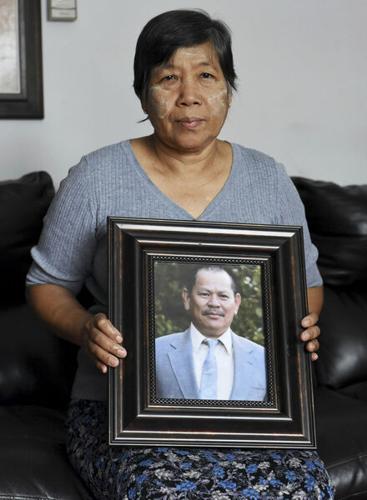 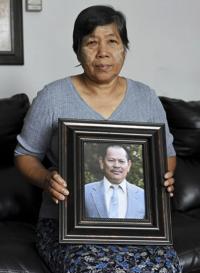 <p>Rachel Von | The Journal Gazette</p> <p>Ohn Than holds a photo of her husband, Kyaw Kyaw, who collapsed and died at Nisco in 2016.</p> 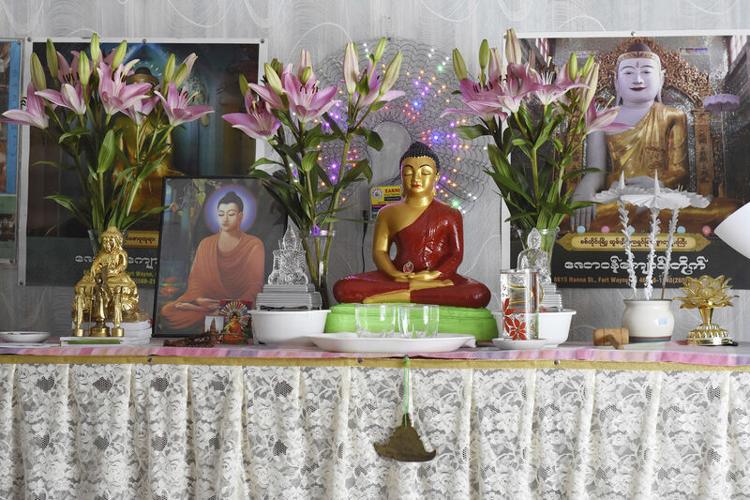 <p>Rachel Von | The Journal Gazette</p> <p>A shrine sits inside Ohn Than's home. She says her husband was a kind man who took care of his family.</p> 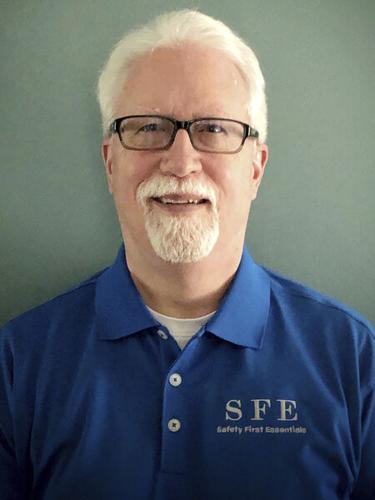 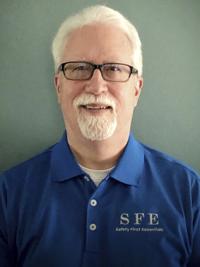 <p>Rachel Von | The Journal Gazette</p> <p>Ohn Than holds a photo of her husband, Kyaw Kyaw, who collapsed and died at Nisco in 2016.</p>

<p>Rachel Von | The Journal Gazette</p> <p>A shrine sits inside Ohn Than's home. She says her husband was a kind man who took care of his family.</p>

Tuesday marked the third anniversary of the death of a local Burmese worker – and the birth of a local worker movement.

Some co-workers believe Kyaw Kyaw suffered unfair treatment by plant supervisors, who doubted his physical distress and waited two hours after he became ill before calling an ambulance. They also believe Burmese refugees are being recruited and targeted for abuse because of their nationality.

About three dozen local Burmese have banded together to fight for their rights with the assistance of David Frank, a local civil rights attorney.

Tom Lewandowski, a community organizer and executive director of the Workers' Project, and others within the local labor community are supporting the group.

Not all members of the group are current or former Nishikawa Cooper employees, but those who are have taken formal action against the company. Frank represents 21 Burmese workers who have filed a complaint with the Equal Employment Opportunity Commission, sparking an investigation that could take six months – or longer, he said.

Among their requests are a safe working environment and to be treated with dignity and respect.

The complaint is working its way through the commission's mediation process. If that fails, the workers plan to file a class-action lawsuit alleging systematic discrimination.

Mark Kittaka, the local attorney representing Nisco, as the company is called, provided a statement from the company. Although officials declined to comment on specific allegation in the pending EEOC claim, they outline some management guidelines.

Among those, they said, is uniform adherence to work rules “regardless of race or national origin.” Nisco also respects “all other (worker) rights protected under Title VII.” Title VII of the Civil Rights Act of 1964 is a federal law that prohibits employers from discriminating against employees on the basis of sex, race, color, national origin and religion.

It's relatively easy, he said, for an employer to take advantage of the Burmese, especially because the legal refugees lived under a regime where those who spoke out against authority suffered severe consequences, including imprisonment.

The country now called Myanmar was known as Burma when many of the workers fled the fighting there. About 6,000 Burmese refugees and immigrants, who now call Fort Wayne home, identify themselves by the country's former name.

Burmese refugees have a limited understanding of workers' rights and don't know whom they can trust, Frank said. But they have entered the U.S. legally and can work here.

Lewandowski has met monthly with local Burmese workers to understand the challenges they confront on the job.

As executive director of the Workers' Project, Lewandowski meets with various groups or “circles” of workers who have similar needs and concerns. Among the nonprofit's affinity groups are an Education Workers' Circle, a Hispanic Workers' Circle and a Burmese Workers' Circle.

“Burmese workers are isolated, exploited and subjected to extreme discrimination bordering on colonialism and slavery,” Lewandowski said. “It has a negative effect on all of us workers and on our democracy and our society.”

Perhaps the biggest obstacle to finding good jobs is the language barrier. The Burmese language is distinctly different from English, even using a different alphabet. Some former professionals among the Burmese have been forced to find menial work in Fort Wayne because they haven't mastered English.

Nisco has recruited Burmese workers by making the hiring process exceptionally easy, several workers said during two group interviews with The Journal Gazette. Some asked not to be named in print for fear of reprisals.

The second-shift workforce at Nisco is predominantly Burmese – workers who were hired without completing a written application or a job interview in English. Hispanic workers are directed to apply at another Nisco factory, where they are assigned to the same shift.

Kent Prosser, business manager of Plumbers & Steamfitters Local 166, said that assigning Burmese workers to one shift and Hispanic workers to a different one strikes him as an attempt to isolate and control foreign-born workers.

Even if it's easy to get hired, it's not easy to thrive in the working conditions, the workers said.

Safety meetings, for example, are conducted only in English, even though managers know some workers have no idea what's being said, the Burmese workers said. Although a few workers are fluent in both languages, they aren't allowed to translate during the meetings, said Kyaw Thet, a Burmese worker whose command of English is better than that of many of his co-workers.

The company's employee handbook, which explains workers' rights and responsibilities, is also offered only in English. Nisco officials said they are working on getting it translated into Burmese.

Bob Tomlinson, a safety consultant who owns local firm Safety First Essentials, retired from UPS where, he said, safety is a priority.

“I am shocked that they do not want to interpret (safety instructions) in workers' own language,” he said of the company's managers.

“The more involved employees are in the safety meetings, the better it is for the company,” he added.

“Like many employers with multi-cultural workplaces, the language barrier is a challenge and makes communication difficult at times,” the statement said. “However, Nishikawa Cooper has interpreters available for many of the meetings, and the company offers free English classes to employees before, during and after their regular shifts (two-hour classes, two days a week). The company values its employees and is attempting to help improve their language skills both at work, as well as for their interactions outside of work.”

The workers have raised additional issues.

On the production floor, Kyaw Thet said, Burmese workers aren't allowed to talk to each other in their native language because supervisors fear the workers are talking about management.

The workers also complained about excessive heat and poor air quality in the factory.

The facility makes the rubber seals that line car doors – also known as weather stripping. As the rubber is heated, it emits fumes. The process also involves applying silicone spray, which releases chemicals into the air workers breathe.

“I think the average person can understand why there might be some health concerns,” Frank said.

Nisco didn't confirm or deny that its ventilation system was updated after Kyaw Kyaw's death.

The company's statement did address his death.

“As for the allegation regarding the unfortunate employee who passed away due to a nonwork-related medical condition, there was no delay in notifying emergency personnel. When it appeared that emergency medical attention was necessary, they were contacted to assist the individual,” the statement read. “IOSHA was notified as required by regulations and no safety orders were issued regarding the company's response or working conditions.”

Officials with the Indiana Department of Labor, who oversee the Indiana Occupational Safety and Health Administration, checked their records over the past 10 years for inspections and safety orders related to Nisco. A spokeswoman said the only inspection on file for Nisco during that period was dated May 2017. No safety orders were issued related to that inspection, she said.

The certificate on file with the Indiana State Board of Health lists the cause of death as “acute myocardial infarction,” the medical term for a heart attack.

It's impossible to know whether he would have survived if medical assistance had been summoned sooner.

It's a question that haunts his widow, who can't talk about that night without shedding tears.

Ohn Than, who reached a separate, confidential settlement with Nisco, isn't participating in the EEOC complaint. Through an interpreter, she described the amount of money she received from the company as a small amount when compared to the value of a human life.

On an afternoon last week, Ohn Than welcomed The Journal Gazette into her modest but tidy home on the city's south side. With her 18-year-old grandson, Moe Oo, serving as translator, she described her deceased husband as a loving person, strong and educated.

“He was a kind person who took care of his family,” she said.

Ohn Than lives now with her daughter's family, including her son-in-law and four grandchildren. She is the mother of three from her first marriage. She and Kyaw Kyaw, who met in a Thai refugee camp, didn't have children together.

The fallout from Kyaw Kyaw's death is felt beyond his immediate family. He has become a symbol for all the injustices the local Burmese refugee community believe they have suffered. His death has created a kind of tipping point for their frustrations, frustrations they won't keep to themselves any longer.

• When production falls behind schedule, workers are told to skip some steps in the process; when the parts they have made and signed later fail quality inspection, Burmese workers are blamed. Anyone written up three times for quality lapses can be fired – even if they were following supervisors' instructions to ignore procedure.

• Strenuous jobs are assigned to Burmese only, not by seniority or on a rotation that would include other workers.

• Employees are required to clean their area after each shift, putting waste into heavy trash cans. Those cans must then be emptied outside into a large bin. The height of the bin requires the heavy trash cans be hoisted onto workers' shoulders. Burmese workers said the company has denied their requests to install a ramp to the bin or in some other way make the task less physically taxing.

Since the Burmese workers began organizing, signing petitions and speaking out, they say Nisco has fired three of the group's leaders, citing reasons the workers consider absurd.

One woman, for example, was told that after 21 years on the job she suddenly wasn't performing up to the necessary quality standard.

Frank, the attorney, said firing those who speak up can be a successful strategy because it intimidates other workers.