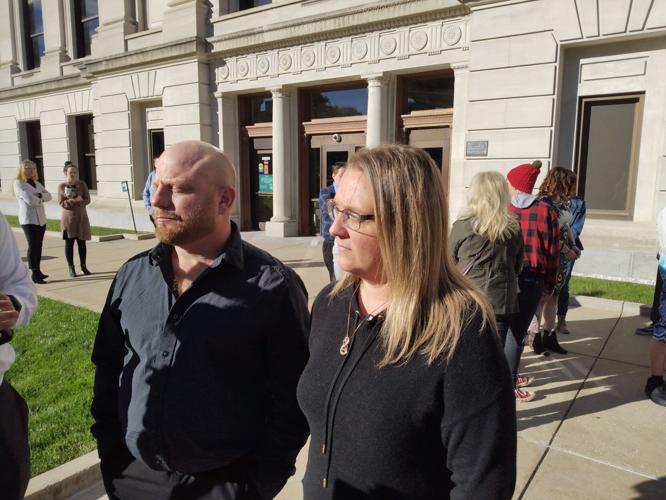 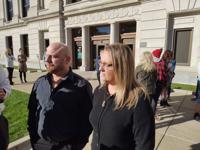 Toby Vonholdt and Shana Pineault, the parents of Shelby Vonholdt, speak Friday outside Allen County Courthouse after the sentencing of their daughter’s killer, Valerie Hardiek. 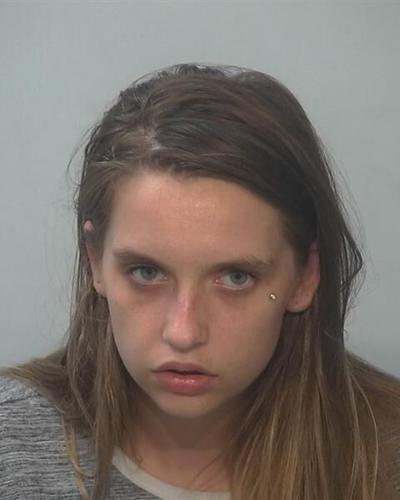 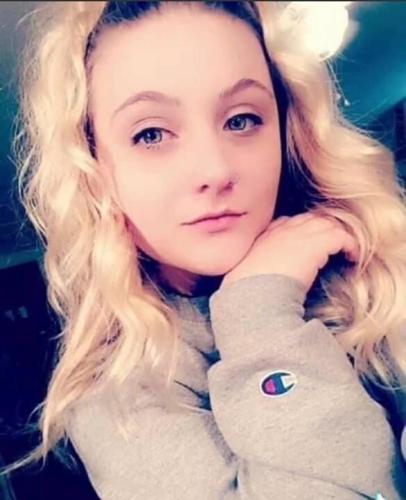 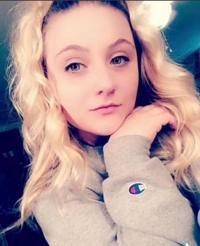 Despite entering a plea of guilty but mentally ill, Valerie Rose Hardiek, 24, on Friday received the longest possible sentence for murder in Indiana, 65 years.

The plea agreement that Hardiek entered into July 8 had no restrictions for how long she would serve for shooting 20-year-old Shelby Erin Vonholdt in the victim’s Fort Wayne home June 20, 2021.

Allen Superior Judge David Zent said before he sentenced her that the murder was obviously premeditated, and Hardiek fled to Ohio afterward because she was aware of what she did. Although Hardiek had a hard upbringing and mental issues, she also had an escalating criminal history and was out on pretrial diversion for misdemeanor criminal trespass when she killed Vonholdt, he said.

No specifics were given Friday about Hardiek’s mental condition.

On the day of the murder, Hardiek went to a house on Eileen Street about 6:45 p.m. and shot Vonholdt eight times, according to court records and testimony. Vonholdt was able to call 911 and say “Valerie” shot her. And when the first police officer to arrive asked who shot her, she repeated “Valerie,” according to court documents.

Hardiek was arrested the day after the shooting at a gas station in Van Wert County, Ohio. A news release from the Van Wert County Sheriff’s office said she’d been walking around pointing a handgun at customers and trying to read their credit card numbers for about an hour.

Allen County Deputy Prosecutor Tom Chaille said Hardiek’s motive was jealousy, but he didn’t elaborate. According to the victim’s family, the two women were acquaintances who knew each other mostly from Facebook. Vonholdt’s father, Toby Vonholdt, said in his statement to the court that he heard jealousy was the motive but thought there was more about the case that wasn’t known.

Chaille also said that although Hardiek accepted responsibility for the killing, “there have been zero expressions of remorse.”

Vonholdt’s parents also felt that Hardiek showed no remorse, either when she pleaded guilty or when she declined to make a statement to the court Friday, where she could have apologized.

Toby Vonholdt said that when Hardiek entered her plea, “she almost wore that murder as a badge of honor.”

“I feel it was just, that the judge made the best decision he could,” he added.

Vonholdt said during his victim’s statement that he wanted Hardiek to see the faces of the family she hurt. He also talked about his daughter planning to return to school and become a therapist of some sort, using her experience to help others.

Shelby Vonholdt’s mother, Shana Pineault, said, “If anyone needed anything, Shelby would not hesitate to help.” She also described her daughter’s smile as constant and infectious.

As part of Hardiek’s plea agreement, the prosecution dropped a sentence enhancement charge for using a gun to commit the crime. That could have added 20 years to Hardiek’s sentence.

Vonholdt’s death was the 22nd of 49 homicides in Allen County last year. The number of cases tied the record set in 2016.

Crime and courts reporter James D. Wolf Jr. began working as a journalist in 1987 while earning his bachelor’s degree at Purdue University Calumet. He has worked in Indiana, Iowa and Illinois.