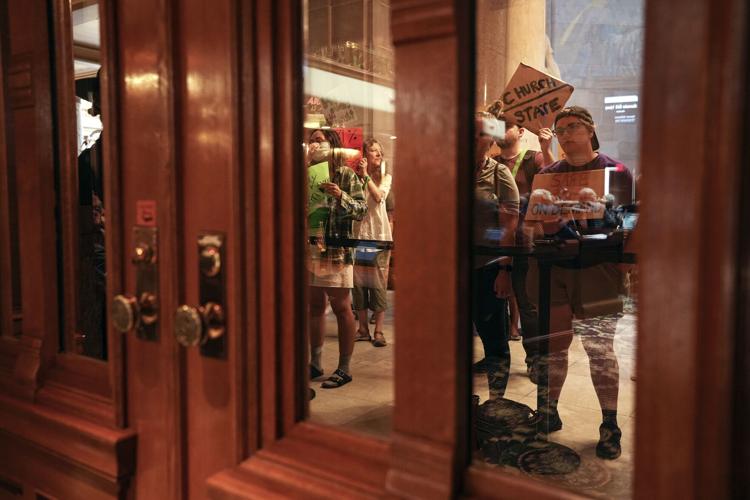 Demonstrators stand outside the House chamber before a vote is held on Senate Bill 1 during a special session Friday at the Statehouse. The bill to ban nearly all abortions was approved by the legislature and signed by the governor Friday night.

Demonstrators stand outside the House chamber before a vote is held on Senate Bill 1 during a special session Friday at the Statehouse. The bill to ban nearly all abortions was approved by the legislature and signed by the governor Friday night.

The ban would be the first of its kind passed by a state legislature since the Supreme Court overturned Roe v. Wade in June.

Nine House Republicans voted against the bill. Some opposed SB 1 because it went too far in restricting abortion access. Others, including Rep. John Jacob, R-Indianapolis, and Rep. Curt Nisly, R-Milford, opposed the ban because they thought it didn’t go far enough.

Jacob, who supports a complete ban on abortion with no exceptions, called SB 1 “a weak, pathetic bill.”

Rep. Ann Vermilion, R-Marion, gave a lengthy explanation of her decision to vote no on the law. The lawmaker said she’s a “proud Republican” and that she “can be pro-life and pro-woman, pro-choice.”

“I believe that the Lord Jesus would never call a woman a murderer, a pro-abortion, a baby-killer,” Vermilion said. “I despise those words.”

Many Democrats also spoke against SB 1, citing various reasons for their objections to the bill. Rep. Vernon Smith, D-Gary, contrasted the Republican position on abortion with their support of personal choice on issues including vaccinations and schools. Another Democrat, Indianapolis Rep. Cherish Pryor, said the “eyes of the nation” are on Indiana.

Rep. Renee Pack, D-Indianapolis, delivered a passionate speech during which she talked about her decision to have an abortion. She said SB 1 will not stop abortions, but it will return Indiana to the days of “back-alley abortions.”

“Sir, I am not a murderer, and my sisters are not murderers either,” Pack said.

House Majority Leader Matt Lehman, R-Berne, spoke in favor of SB 1 and called it a “good bill.” Other Republicans who voted for the bill said that while it isn’t exactly what they want, they view it as a first step.

In a statement after Friday’s vote, GiaQuinta said the fight for abortion access had only begun.

“Today, radical and out-of-touch conservatives in the House rammed through authoritarian legislation on the principles of forced birth and human suffering,” the Fort Wayne lawmaker said. “Day after day of difficult and emotional testimony from experts, survivors and women – none of which supported Senate Bill 1 – did not deter the GOP’s endless crusade to control women.”

Later, in the Senate, Democrats continued to speak out against the ban. They were joined by a few Republicans, including Sen. Vaneta Becker, R-Evansville.

Becker shared a letter from fellow Sen. Phil Boots, R-Crawfordsville, who she said is on vacation and was not present for the vote. According to Becker, Boots wrote that SB 1 is the “worst attack on the personal freedoms of the citizens of Indiana” he’d seen in his time at the Statehouse.

Republican Sen. Mike Bohacek was overcome with emotion while speaking about women and girls with developmental disabilities.

“What happens to someone on a guardianship that’s pregnant?” the Indianapolis lawmaker asked.

Bohacek mentioned his 21-year-old daughter and said she would be inconsolable if she lost her favorite stuffed animal.

“Making her carry a child to term, …” Bohacek said. He began to tear up, then left the chamber mid-speech.

“There are just eight of us in this chamber who have ever had the potential to become pregnant,” Breaux said. “Yet today, we are here today to tell millions of Hoosier women ... what they can and cannot do with their bodies.”

Sen. Liz Brown, R-Fort Wayne, was the lone senator other than the bill’s sponsor, Rep. Sue Glick, R-LaGrange, who spoke in favor of SB 1. Brown said she understands why anti-abortion groups are disappointed with the legislation and that she’s “heartbroken.” But, she said, the bill will stop many abortions.

Although Indiana Right to Life voiced opposition to SB 1 multiple times throughout the past two weeks, the anti-abortion group’s president released a statement Friday night calling on Holcomb to sign the bill.

“Although we cannot fully endorse the amended SB 1 due to its rape, incest, and lethal fetal anomaly exceptions,” Right to Life President Mike Fichter said in a statement, “we do acknowledge the path forward is to either embrace the potential to end the vast majority of abortions in Indiana now, or to allow all abortions to continue under current law, making Indiana an abortion-destination state and driving abortion numbers even higher.”

If enacted, SB 1 will go into effect Sept. 15 and would ban almost all abortion services in the state with few exceptions.

Those exceptions include cases of rape or incest, with a 10-week time limit. SB 1 would also allow doctors to provide abortion services when the pregnancy threatens the life of or poses a “serious health risk” to the pregnant woman, as well as when the fetus is diagnosed with a lethal fetal anomaly within the first 20 weeks.

SB 1 also terminates the licensure of abortion clinics in the state, requiring all abortions to be performed at hospitals or outpatient surgical centers owned by hospitals. The bill would not ban Plan B and explicitly does not affect in vitro fertilization.

It does, however, require the state medical board to revoke the medical licenses of doctors who perform an abortion in violation of Indiana law.

Friday’s votes marked the end of a two-week special session.