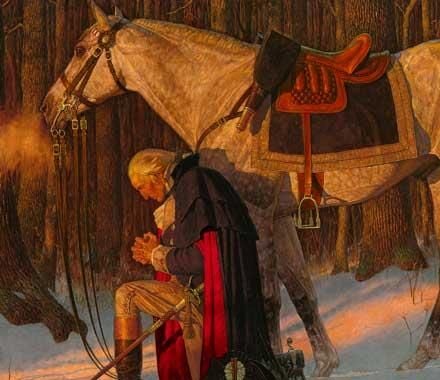 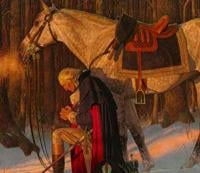 Arnold Friberg’s 1975 painting “Washington at Valley Forge” captures the general and future president knelt in prayer beside his horse, Nelson, during the winter of 1777-78 at Valley Forge, Pennsylvania. 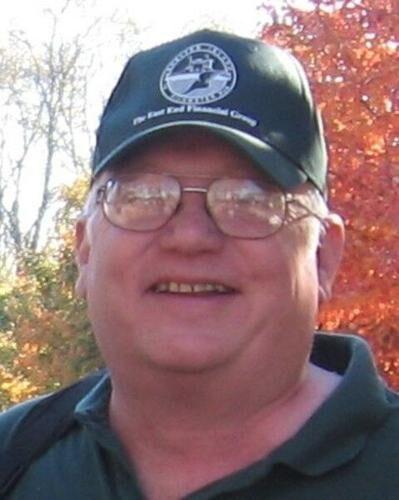 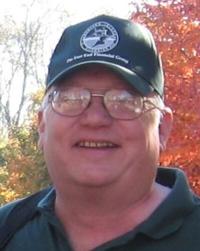 Thanksgiving Day is a national holiday in the United States, occurring on the fourth Thursday of November.

In 1621, the Plymouth colonists and the Wampanoag native American tribe shared an autumn harvest feast that is acknowledged today as one of the first Thanksgiving celebrations in the colonies. For more than two centuries, days of thanksgiving were celebrated by individual colonies and states.

It wasn’t until 1863, in the midst of the Civil War, that President Abraham Lincoln proclaimed a national Thanksgiving Day to be held each November.

Our American holiday is particularly rich in legend and symbolism. The traditional fare of the Thanksgiving meal typically includes turkey, bread stuffing, potatoes, cranberries and pumpkin pie. It is often the busiest time of the year, as family members gather with one another.

But unknown to most Americans is the fact that going into the third year of the American Revolutionary War (1777), the Second Continental Congress declared the first National Thanksgiving.

In late September 1777, the British Army marched into the continental capital city of Philadelphia unopposed. The Continental Congress fled to interior Pennsylvania. While this was a stunning victory for the British in their central campaign, it was overshadowed by an even more extraordinary American victory in Saratoga, New York.

In mid-October, a British force of more than 6,000 was forced to surrender. This victory eventually led to a military alliance with France.

On Nov. 1, the Second Continental Congress, in response to the major victory at Saratoga, issued a National Thanksgiving Day Proclamation. The proclamation announced that:

“… these UNITED STATES (are) to set apart THURSDAY, the eighteenth Day of December next, for SOLEMN THANKSGIVING and PRAISE…. under the Providence of Almighty GOD, to secure for these United States, the greatest of all human Blessings, INDEPENDENCE and PEACE…”

They recommended all people stop and give thanks to God for blessing America and its troops in their mission to achieve independence and for all their victories in the Revolutionary War.

Of course, this was easy for members of Congress to state from the relative safety and comfort of York, Pennsylvania. They had shelter, clothes, food, a warm bed and, most importantly, no one actively trying to kill them.

The army with Gen. George Washington, on the other hand, had little to be thankful for. While the British had surrendered at Saratoga, the main army in Pennsylvania had suffered three successive defeats (Brandywine, Paoli, Germantown) and the loss of the nation’s capital in the Philadelphia campaign.

Around Philadelphia, Washington’s Army and the British had several unsuccessful minor encounters, trying to draw each other into a major battle.

From Dec. 4 through 7, the British led a sizable contingent of troops out of Philadelphia in one last attempt to destroy Washington and the Continental Army before the onset of winter.

After a series of skirmishes, the British called off the attack without engaging Washington in a decisive conflict.

By early afternoon on Dec. 8, the British were observed marching back toward Philadelphia. With the nights getting colder and the British seemingly in winter quarters, our Army began an eight-day, 13-mile journey on Dec. 11 to Valley Forge, Pennsylvania.

On Dec. 17, 1777, Washington issued general orders to the Army, stating: “Tomorrow being the day set apart by the Honorable Congress for public Thanksgiving and Praise; and duty calling us devoutly to express our grateful acknowledgements to God for the manifold blessings he has granted us— The General directs that the army remain in its present quarters, and that the Chaplains perform divine service with their several Corps and brigades…”

Dec. 18 saw Washington lead his Army in observing the day of thanksgiving. Very near the final destination of Valley Forge, he chose to take the day off from marching to give thanks.

The Army spent the day bivouacked at Gulph Mills, 5 miles from Valley Forge. Soldiers attended a sermon and received a special meal that included rice and roasted pig.

Many had not tasted food that good in many days.

Most soldiers’ feet, and especially their stomachs, were very thankful. It was nice to have a quiet night’s sleep. Nonetheless, the weather “was dark and misty, cold rain fell. Had not Congress long before this time appointed this day as a day of general thanksgiving, the celebration, because of the weather conditions, might not have been held.”

Jeremiah Greenman, a simple soldier, documented in his diary:

“This is Thanksgiving Day thro the whole Continent of America-but God knows We have very Little to keep it with this being the third day we have been without flouer or bread… . Upon the whole I think all we have to be thankful for is that we are alive & not in the grave with many of our friends.”

“… (O)ur country, ever mindful of its suffering army, opened her sympathizing heart so wide, upon this occasion, as to give us something to make the world stare … A half a gill of rice, and a table spoon full of vinegar!!”

Valley Forge and the horrible winter that would follow were just a half day’s march away.

This year, as you sit down to celebrate Thanksgiving, you would do well to remember those soldiers who went without, marched and fought to establish a new country and perhaps include them in the list of people for whom you are thankful. I do every day!

As for me and mine, we also intend to add a little bit of rice and vinegar to our menu.

Stephen R. Jahrsdoerfer of Fort Wayne is a retired field artillery officer who served the United States Army for 38 years in uniform and as a civilian.