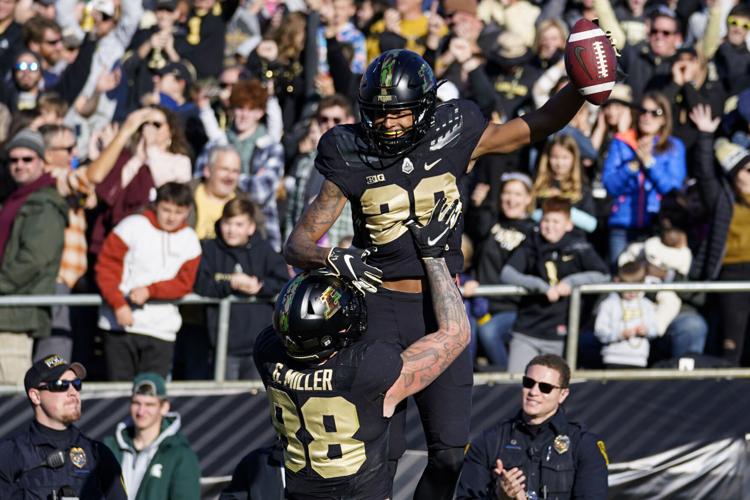 Purdue receiver Broc Thompson cappped his first season with the Boilermakers with a huge game in the Motor City Bowl, but the Marshall transfer had surgery on both knees in the offseason. 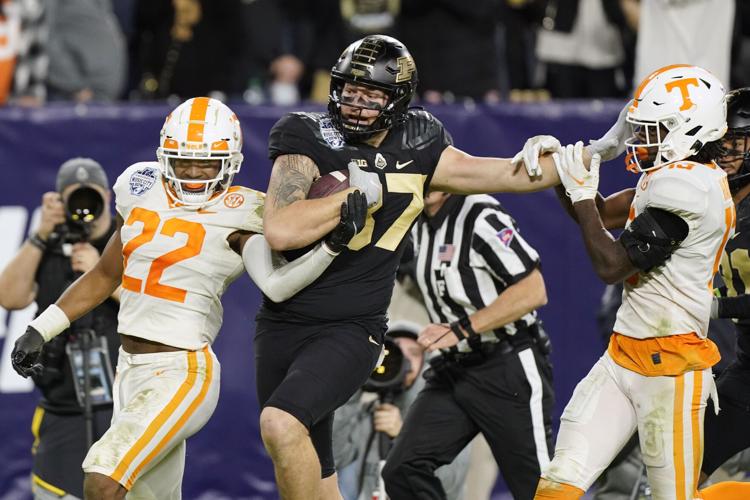 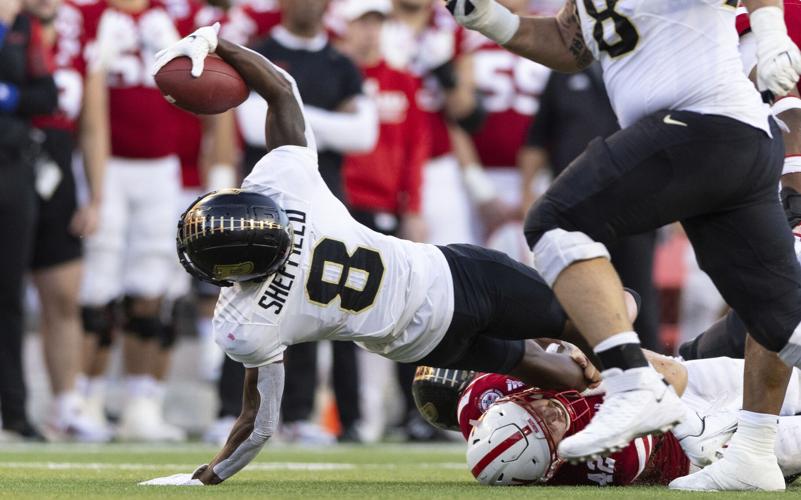 Purdue receiver Broc Thompson cappped his first season with the Boilermakers with a huge game in the Motor City Bowl, but the Marshall transfer had surgery on both knees in the offseason.

INDIANAPOLIS – Purdue has had a superstar at receiver for four straight seasons.

First, it was Rondale Moore, who won the Paul Hornung Award as the most versatile player in college football in 2018 and went in the second round of the 2020 NFL draft. Indianapolis native David Bell came next and was one of three finalists for the Biletnikoff Award as the best receiver in the country last season before he followed Moore into the NFL.

Milton Wright was supposed to be next. The former four-star recruit caught 57 passes for 732 yards and seven touchdowns last season – 213 yards and three touchdowns came in a win over Northwestern in November – as Bell’s sidekick and figured to step into the No. 1 spot this season. Instead, a reported academic issue made him ineligible and he is no longer with the program. Coach Jeff Brohm confirmed – without going into detail – Wednesday during Big Ten media days at Lucas Oil Stadium that Wright is not with the team.

With Bell and Wright departing, the Boilermakers are losing more than 2,000 yards of receiving production, 44% of their total. For a team that threw on nearly 60% of plays last season and struggled to run the ball, that is an enormous chunk for which replacements are not readily apparent. Unlike the last four years, there might not be a sure-fire star whose talent will skew defenses and open opportunities for others.

“We’ve been fortunate to have great receivers at Purdue the last couple years,” Brohm said. “This year we’re going to have newcomers you may not have heard about as much. I do think we’ve built very good depth in that room, and we have a lot of guys I think can emerge and step up and hopefully play close to that level if they’re playing well.

“It’s just a matter of those guys haven’t played a lot of football in games. They haven’t shown to the world they can do it in a real game, but we feel they have good promise.”

The Boilermakers are not entirely devoid of experience. They return former Marshall transfer Broc Thompson, who caught seven passes for 217 yards in Purdue’s Music City Bowl win over Tennessee in the absence of Bell and Wright. He did that while hobbled with injuries in both knees and he needed off-season surgery. He should be ready for camp, but it’s unclear whether he’ll be ready the No. 1 receiver.

Also in need of offseason surgery were TJ Sheffield, a speedy slot receiver who suffered an ankle injury making a touchdown catch in the bowl game, and Mershawn Rice, an intriguing redshirt freshman who hurt his foot against Notre Dame in September. Brohm believes both will be ready for fall camp.

In order to rebuild the depth at the position and take some pressure off the players coming off surgery, the Boilermakers brought in three transfer wideouts. The headliner is former Iowa receiver Charlie Jones, the reigning Big Ten Return Specialist of the Year, who left the ground-based Iowa offensive attack for Brohm’s aerial scheme.

“He’s done great things on special teams and he wanted to go somewhere he can showcase what he can do at receiver and get a chance to hopefully play at the next level by catching a lot of balls and playing in a passing offense,” Brohm said. “He gives us great speed and he’s got a great connection with (quarterback) Aidan O’Connell.”

Jones’ Iowa teammate Tyrone Tracy, who will play running back and receiver, also transferred to Purdue, as did sophomore Elijah Canion from Auburn.

Also expected to step up will be former four-star recruit Abdur-Rahmaan Yaseen, who was beginning to emerge as a redshirt freshman last season before a knee injury cost him the back half of the campaign.

“The fact is there’s one ball to go around and we’ve gotta make sure we utilize all their talents and strengths and put them in a position to succeed,” Brohm said of his receiver. “I do think we can score some points.”

The Boilermakers could also turn toward their tight ends to replace some of their departed production. Payne Durham earned honorable mention All-Big Ten honors last season and Garrett Miller surfaced as an athletic, sure-handed target late in the season.

“We’re still going to have really good receivers,” Durham said. “If the game plan calls for me to have a bigger role, then I’m always up for that.”

The passing offense should be helped significantly by the return of O’Connell should help to make the receiver questions less glaring. The second-team All-Big Ten signal-caller said he doesn’t mind spreading the ball around.

“This year, more than ever, it’s going to be a steady diet of guys rather than Rondale Moore or David Bell and Milton,” O’Connell said. “It’s all good for me either way. … I think we’re going to have a lot of different guys to help us win this year.”

So, even though there are questions for Purdue heading into camp, there are plenty of players who could stake a claim and become the top target.

“No, no one has the star power yet,” Brohm said. “They have to go out and prove it.”