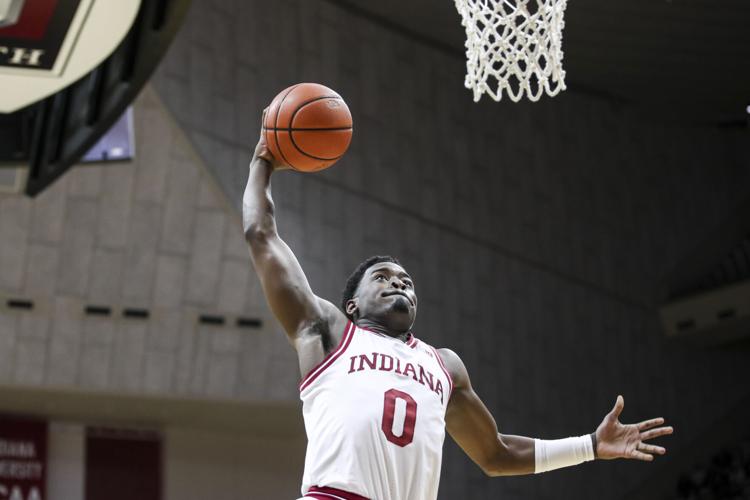 Indiana's Xavier Johnson skies for a dunk in the Hoosiers' exhibition game against Saint Francis. 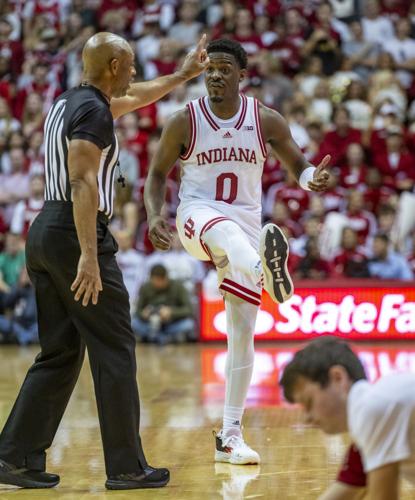 Indiana guard Xavier Johnson (0) reacts toward a game official after being called for a foul against Morehead State on Tuesday. Johnson had four points, three assists and two turnovers in 20 minutes in the IU victory. 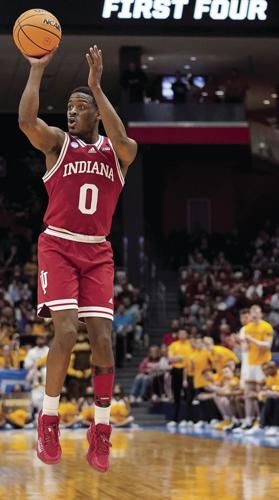 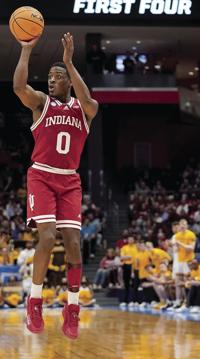 Indiana's Xavier Johnson skies for a dunk in the Hoosiers' exhibition game against Saint Francis.

Indiana guard Xavier Johnson (0) reacts toward a game official after being called for a foul against Morehead State on Tuesday. Johnson had four points, three assists and two turnovers in 20 minutes in the IU victory.

BLOOMINGTON – Xavier Johnson faced the stark reality his basketball days could be over when an April police chase ended in his arrest in a Bloomington parking lot.

Indiana coach Mike Woodson was willing to forgive his starting point guard if he agreed to some conditions. Johnson’s car couldn’t be on campus, he needed to follow all the team rules and he had to be fully committed to winning games.

Six months later, a revitalized and contrite Johnson finds himself in the early stages of his fifth and final college season for 13th-ranked Indiana (1-0), which faces Bethune-Cookman tonight at Assembly Hall.

“It just seemed like I hit a big-time wall,” Johnson said, explaining what happened that April night. “I thought my career was over, honestly. I’m mad at myself for doing something like that, but I mean I’m glad God gave me a second chance to come back and play what I love to do.”

He might not be with Indiana had he been playing for Woodson’s coach, Bob Knight, who was known as much for being a strict disciplinarian as he was for his volatile public outbursts.

But Woodson, whose coaching career spanned decades in the NBA, understood the challenges Johnson faced last season and took a different tack.

After transferring from Pittsburgh and winning the starting point guard job, Johnson struggled with turnovers, decision-making and at times was a non-factor in the scoring column, too.

The deaths of his uncle and grandfather took an emotional toll on the Virginia native and in February, Johnson was one of five players Woodson suspended for a game for “curfew violations.”

Johnson appeared to be turning his life around after a strong finishing run to help Indiana end a six-year NCAA Tournament drought, but then came the arrest.

According to the police report, Johnson was clocked going 90 mph in a 40 mph zone, did not stop when the officer turned on his siren and lights, disregarded a stop sign in an apartment complex and then attempted to switch seats with another student in the car after he pulled over. He was charged with resisting law enforcement with a vehicle and reckless driving, a felony.

“He doesn’t have a vehicle anymore, I took that away from him,” the coach said. “If that’s punishment, it’s punishment and I don’t mean that in a negative way. We’re just trying to do the things necessary to help us win basketball games, and I think he’s made a major step in that direction.”

Johnson’s parents sided with Woodson and now Johnson finds himself thriving in a whole new world, amid expectations of winning a Big Ten title and chasing the school’s sixth national title.

And Johnson could play a key role. In the final 10 games last season, he averaged 16.6 points, 6.6 assists and four rebounds and shot 50% from 3-point range as the Hoosiers played their way off the bubble and into March Madness. This after averaging 12.1 points and 5.1 assists during the season.

Teammates say he’s been a different player since returning to campus.

“He’s definitely taken a big-time step in leadership and just kind of taking that role as being more vocal,” third-year guard Trey Galloway said. “I think he’s done a great job of being more vocal with the younger guys and kind of bringing them along.”

Johnson has struggled somewhat in the Hoosiers’ first few games, shooting a combined 5 for 19 in their two exhibition contests with five turnovers in 25 minutes and then dealing with foul trouble in the regular-season opener against Morehead State. He is adjusting to playing next to another point guard as five-star freshman Jalen Hood-Schifino handles the ball on a regular basis.

“I told Xavier … you don’t have to do it all this year,” Woodson said after Johnson struggled against Saint Francis. “You really don’t. I think we’ve got enough pieces on this team that you can just do your part and not have to stress out about thinking you have to do everything.

“I just think right now he’s playing too fast. I’ve just got to slow him down and get him in a good frame of mind.”

Having his offseason problems, which were resolved with an August plea agreement ending his court case, behind him did leave Johnson in a good frame of mind at the time.

He said before the season he is ready to make the most of his second chance.

“(Woodson) was just like, ‘If you want to play here, you either have no car or you can go somewhere else,’” Johnson said. “I really didn’t care about my car. I love to play basketball and that’s what I came here to do.”

Dylan Sinn of The Journal Gazette contributed to this story.

No. 13 Indiana vs. Bethune-Cookman: Game Preview