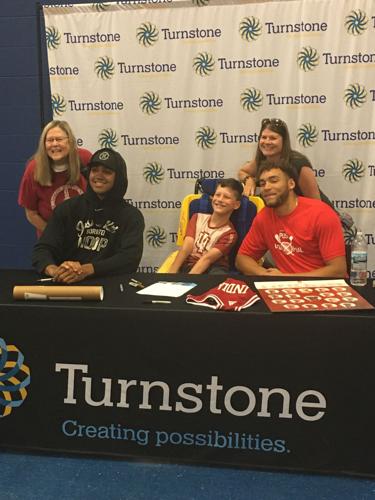 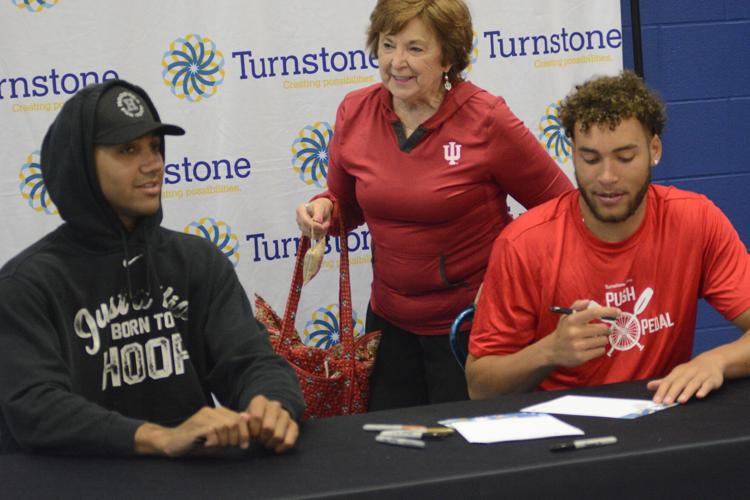 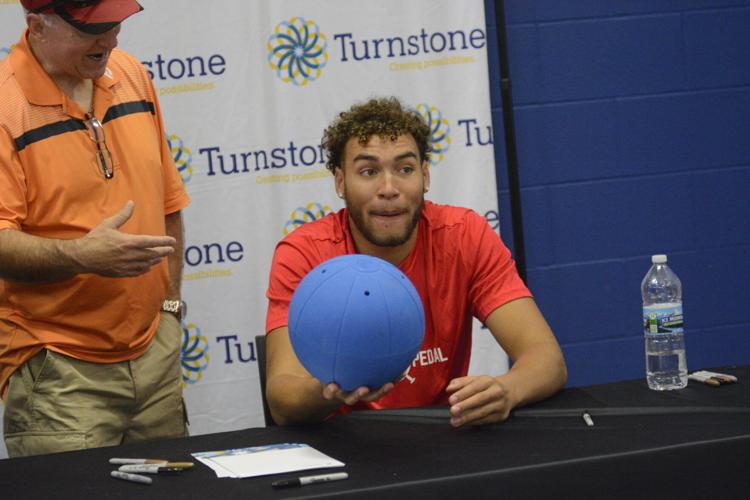 Indiana basketball's Race Thompson learns about goalball during his visit to Turnstone's Goalball Center for Excellence on Saturday. 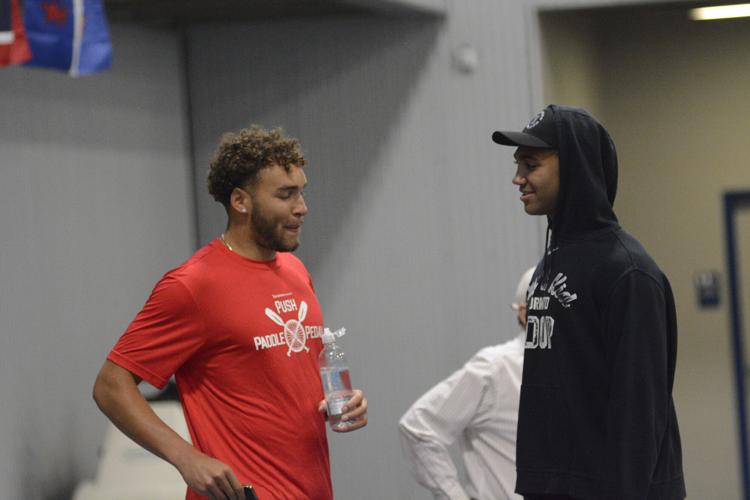 Indiana basketball's Race Thompson (left) and Trayce Jackson-Davis relax during their visit to Turnstone on Saturday, part of their partnership with the organization through Indiana's Hoosiers for Good collective.

Indiana basketball's Race Thompson learns about goalball during his visit to Turnstone's Goalball Center for Excellence on Saturday.

Indiana basketball's Race Thompson (left) and Trayce Jackson-Davis relax during their visit to Turnstone on Saturday, part of their partnership with the organization through Indiana's Hoosiers for Good collective.

Race Thompson held up a goalball and spun it around in his hands. It was about twice as heavy as the basketballs he usually handles, but the sixth-year senior Indiana forward didn’t seem to mind the difference as he had the rules of the game explained to him.

Learning about goalball, a sport designed for athletes with impaired vision, was one feature of the visit Thompson made to Turnstone – Fort Wayne’s nonprofit center dedicated to providing opportunities for alternative-sport athletes and those with disabilities – with teammate Trayce Jackson-Davis on Saturday. The trip to Fort Wayne was part of a deal the pair of Hoosiers made to promote Turnstone through Indiana’s name, image and likeness collective, Hoosiers for Good.

“The idea is they use their platform to push the mission of Turnstone and let people know about all the great work Turnstone does,” Hoosiers for Good executive director Tyler Harris said. “The first thing Race said when I picked them up was ‘I’m super excited to do this today.’ …

“They really care about using their platform to help communities thrive.”

Thompson and Jackson-Davis departed Bloomington with Harris at 5:15 a.m. Saturday and spent two hours, from 9 to 11 a.m., at Turnstone’s Goalball Center for Excellence, greeting everyone who arrived, talking with fans, signing autographs and posing for photos.

The players were not available to speak with the media.

One Hoosiers fan who met two of IU’s most important players was 11-year-old Owen Donahue, who plays for the Turnstone Furious Flyers power soccer team.

“I think that’s a dream come to true to him, he’s a huge IU fan,” said Jenn Donahue, Owen’s mother, who attended Indiana. “Turnstone is a wonderful facility, and Trayce and Race are great role models and athletes, so you put the two together and it’s a special event.”

After getting a photo with Thompson and Jackson-Davis, Donahue wanted to see how tall they were, so they dutifully stood up to their full height: 6-foot-9 for Jackson-Davis and 6-8 for Thompson.

The event was open to the general public, and although many were at the Three Rivers Festival parade at the time, a smattering of Indiana fans wandered in to meet the All-Big Ten forwards.

One visitor wished the players good luck against North Carolina, a game that will take place in Bloomington on Nov. 30. Another mentioned she had attended IU decades ago, prompting Thompson to ask what the school was like at that time.

When the players had worked through the line of fans, they wandered over to the basketball courts in Turnstone’s facility and took in the AAU games happening there.

Jackson-Davis played at the facility during his AAU career as a member of the Indy Heat Gym Rats. Predictably, the two drew stares and whispers from the basketball players and posed for photographs with several of them.

One player who took a photo with the Hoosiers returned to his teammates and declared: “They play for IU. Look at their hands, they’re huge.”

One man in a Kentucky hat asked, tongue-in-cheek, “Are they supposed to be somebody?”

Jackson-Davis and Thompson will likely be back to Turnstone a few more times during their one-year partnership with the organization, which began in April.

The collaboration is permitted under NCAA rules because of name, image and likeness regulation that went into effect July 1, 2021, that allows NCAA athletes to be compensated for promoting products and organizations.

Hoosiers for Good sprang up following the passages of those rules and connected 14 Indiana athletes in its first class with charitable organizations to promote.

“Being able to get Trayce and Race up here and see Turnstone and see Fort Wayne and learn more about what we do, we’re just so grateful to be working with two guys that get it and are excited to come alongside a non-profit,” said Stasha Carrasquillo, Turnstone’s chief marketing officer. “They are great guys and, we should really be proud they’re playing for Indiana University.

“They’ve just been so kind and respectful and really great representatives of the state of Indiana and on behalf of Turnstone today.”