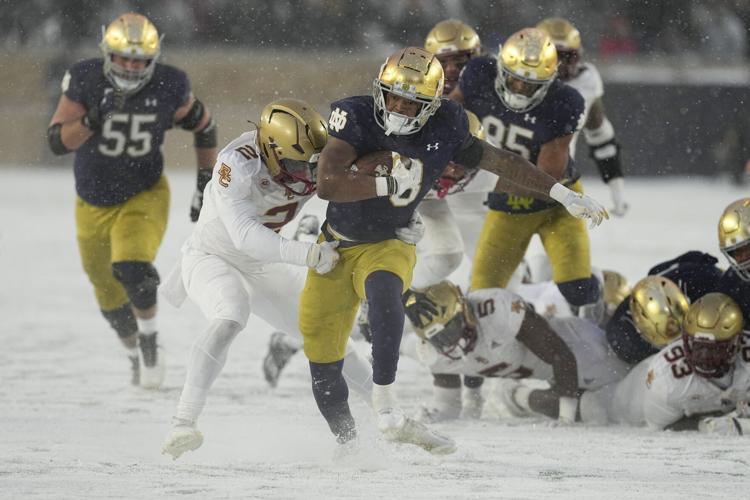 Notre Dame running back Logan Diggs is tackled by Boston College’s Bryce Steele in the second half Saturday in South Bend. 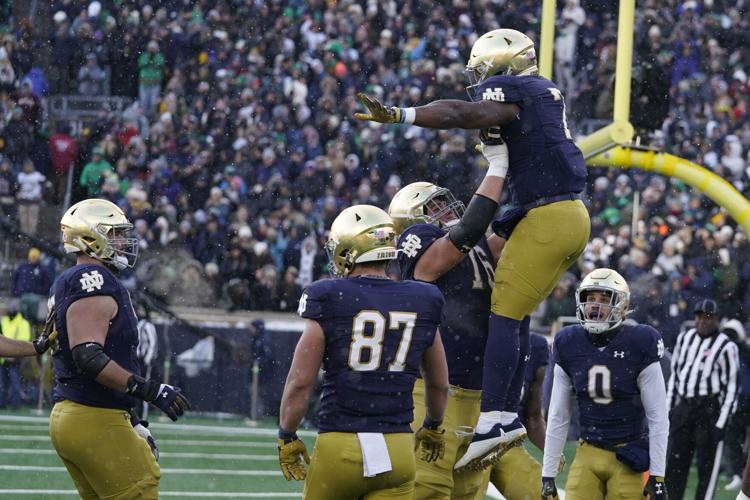 Notre Dame running back Audric Estime (7) celebrates with Joe Alt after Estime ran in for a touchdown during the first half of an NCAA college football game, Saturday, Nov. 19, 2022, in South Bend, Ind.

Notre Dame running back Logan Diggs is tackled by Boston College’s Bryce Steele in the second half Saturday in South Bend.

Notre Dame running back Audric Estime (7) celebrates with Joe Alt after Estime ran in for a touchdown during the first half of an NCAA college football game, Saturday, Nov. 19, 2022, in South Bend, Ind.

SOUTH BEND – As No. 18 Notre Dame sought to close out its home schedule with a victory Saturday against Boston College, a bitterly cold wind whipped through Notre Dame Stadium and eventually brought with it swirling snow, coating the field in white and forcing the grounds crew to use a snow blower to clear the goal lines between the third and fourth quarters.

The weather didn’t bother Notre Dame, which had spent Tuesday and Wednesday practicing outside in the snow in preparation for the game, but the combination of a motivated Irish team on Senior Day and the adverse conditions was far too much for the Eagles, who were completely dominated in a 44-0 Irish victory.

The Irish ran for 281 yards and forced five turnovers in front of an announced crowd of 73,503, barely half of which remained by the third quarter because of the weather.

“It was cold,” running back Logan Diggs said, laughing at the understatement. “It was cold, but it was doable, they took care of us on the sidelines. … It was a great experience for everybody, you could see the joy we all have, the love we all have for each other; it showed today.”

It was the fifth victory in a row for the Irish (8-3), their ninth straight triumph over Boston College and their 28th win in a row in regular-season matchups with ACC opponents. It was a climactic achievement for the group of 25 seniors who were honored before the game, including program cornerstones Jarrett Patterson, Isaiah Foskey, Josh Lugg and Jayson and Justin Ademilola.

“They’re performing and playing at such a higher level than we did at the start of the year,” first-year Irish coach Marcus Freeman said of his team, which has won 8 of 9 since an 0-2 start. “It goes back to the leadership, those seniors. … Those guys looked at themselves and said, ‘We’re going to work,’ and they dragged everyone with them.”

Foskey brought down Boston College quarterback Emmett Morehead – in for injured starter Phil Jurkovec, a transfer from Notre Dame – on the final play of the first half for his Notre Dame record 25th career sack. He broke the previous mark of 24 1/2 set by Justin Tuck in 2004.

Diggs ran 15 times for 122 yards, including a pinballing 51-yard rush on the game’s first offensive play, a play that saw him drag tacklers for 20 extra yards. He added a 1-yard touchdown to put Notre Dame up 10-0 less than four minutes into the game after the first of cornerback Benjamin Morrison’s Notre Dame-record-tying three interceptions gave the Irish the ball at the Eagles’ 20.

The Irish ran for 7.4 yards per carry and four touchdowns, breaking 200 rushing yards for the sixth time this season. They picked up points on each of their first eight possessions. With the Irish already up 23-0, Audric Estime and Chris Tyree each scored a rushing touchdown in the final 3:04 of the first half – Tyree went from 12 yards out untouched through the teeth of the Boston College front to make it 37-0 at halftime – and Estime added a 6-yard touchdown burst with 8:54 left in the third quarter to complete the scoring.

“Going into this week, it was ‘How are we going to send our seniors out right?,’ ” Irish sophomore offensive tackle Joe Alt said. “It was a blizzard out there and being able to be out there with the offensive linemen, my teammates, my brothers, it’s a memory I think I’ll be able to flash back to for the rest of my life, just being out there with them, having so much fun with them. To do it for them on their last game at Notre Dame Stadium in the snow, in the cold was an experience that’ll be with me for life.”

Notre Dame notched its first shutout in 364 days, blanking its opponent on Senior Day for the second straight year after beating Georgia Tech 55-0 last season. Morrison preserved the shutout in the first quarter with an interception in the end zone, his second pick of the day. He added a third interception, his fifth of the season, on an overthrown screen in the third quarter.

“To have a game like that with these seniors, a day like that, it felt like I was a kid out there around a bunch of other grown kids,” Morrison said. “It was just a fun day.”