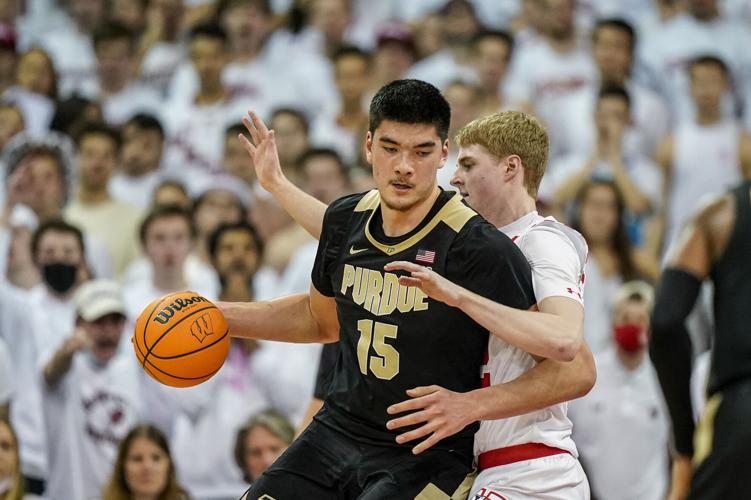 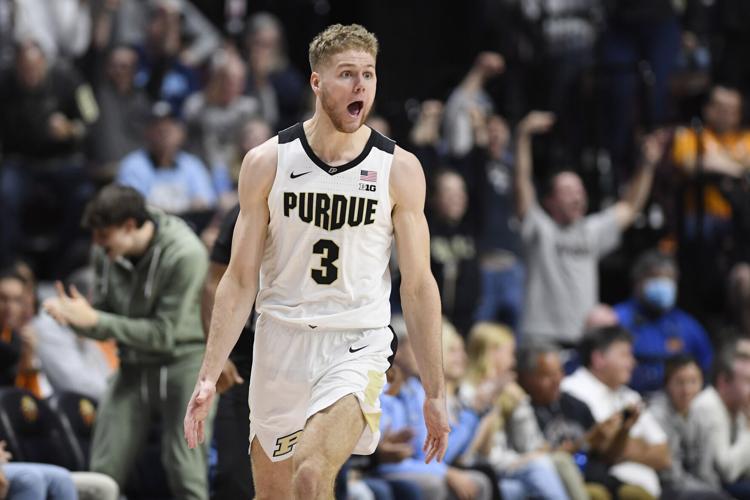 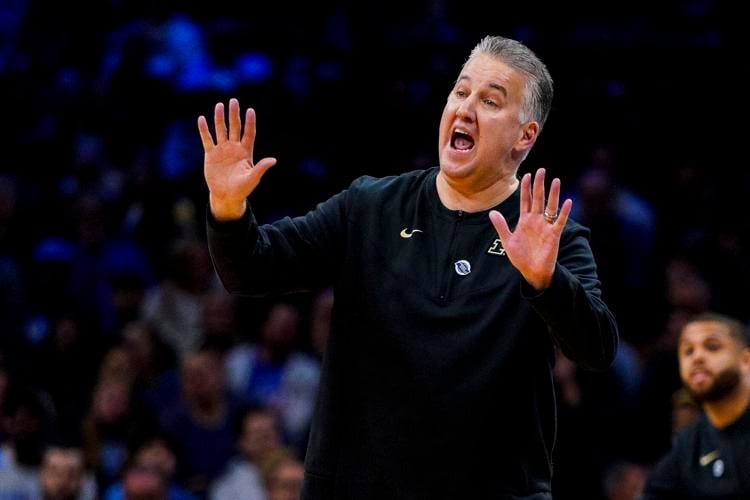 Purdue head coach Matt Painter reacts during the first half of a college basketball game against St Peter's in the Sweet 16 round of the NCAA tournament, Friday, March 25, 2022, in Philadelphia. (AP Photo/Chris Szagola)

Purdue head coach Matt Painter reacts during the first half of a college basketball game against St Peter's in the Sweet 16 round of the NCAA tournament, Friday, March 25, 2022, in Philadelphia. (AP Photo/Chris Szagola)

Purdue basketball coach Matt Painter freely admits the Boilermakers did not quite live up to the lofty expectations set for them last season. A team that reached No. 1 in the AP poll for the first time in program history was not supposed to lose to No. 15 seed St. Peter’s in the Sweet 16, which extended the school’s Final Four drought to 42 seasons.

“We had a good group of guys, a very deep team,” Painter said. “We had a great year, but we didn’t achieve our goals. We didn’t win our league, we didn’t win a tournament. We went to the Sweet 16, which is great, but we wanted to go further than that. But it was a special group of guys and we’re hoping to build off that because we have a lot of guys that played roles. … We’re excited about it because we have some really talented guys who are ready to play.”

Purdue lost the core of last year’s 29-8 team and has just one senior on the roster – Utah transfer guard David Jenkins Jr. Painter believes such a young team has the potential to improve substantially over the next two years.

“We’re excited to have another really competitive team in our league,” said the coach, who will be leading the program for an 18th season next, “but also excited for the growth we can have the next year, too.”

Here is a look at Purdue’s roster heading into the upcoming campaign.

The Boilermakers are most unsettled in the backcourt, where they lose program fixtures Hunter and Stefanovic, two of the team’s best shooters last season, as well as Thompson, Hunter’s heir apparent at point guard. Newman is likely to start at shooting guard but will have to prove the increased defensive intensity he showed at the end of last season was not a blip.

Adding Jenkins out of the transfer portal Wednesday helped and will offset some of the shooting losses, but his ball-handling and defense are question marks. Jenkins will get the first shot at the spot beside Newman, but Smith and especially Loyer will likely get opportunities to prove they belong in the rotation. Loyer, a Homestead graduate, averaged nearly 27 points as a senior on his way to Indiana Gatorade Player of the Year honors.

“We’re losing a lot of people in our backcourt, and it’s going to be up for some guys who maybe had some lesser minutes last year to have an expanded role, but also some true freshmen like (Loyer), like Braden Smith,” Painter said. “That’s what you want as a true freshman, you just want that opportunity to come in and be able to help right away.”

The 6-foot-6 Morton played with the ball in his hands in high school and could be called upon to reprise that role in a pinch.

A bulldog on the glass and an improving offensive player, Gillis is likely locked into the starting lineup. The New Castle native shot 51% from 3-point range before Jan. 30 and 33% after. If he maintains that early success, he could be in the conversation for All-Big Ten. Replacing Ivey, a likely lottery pick in next week’s NBA draft, will be a challenge. Morton is the most likely option after demonstrating some intriguing versatility on defense at the end of last season – he guarded 6-8 Keegan Murray and 6-2 Marcus Carr within 10 days of one another in March and held his own against both – but he’ll be pushed by Kaufman-Renn, a former Gatorade Indiana Player of the Year. After suffering through hand and ankle injuries last season, Kaufman-Renn should be ready to contribute at either forward spot in the fall and provide offensive punch.

As for Furst, the 2021 Indiana Mr. Basketball out of Blackhawk Christian, there is likely a reality in which he carves out 20 to 25 minutes per game as the main backup to Gillis and center Zach Edey. His 3-point shooting as a 6-10 player and nose for the ball could make it difficult for Purdue to keep him off the court.

Edey started for Purdue last season but was never really the focal point of the offense with Ivey running the show. This year, the offense will likely be structured around getting the ball to Edey in the post and then spreading the floor as much as possible. He improved as a passer last season and the Boilers would like to see him take another leap in that area to maximize kick-out opportunities. The 7-4 Canadian played only 19 minutes per game last year and that will have to increase to at least 25 this year without Williams acting as the best backup center in the country.

“(Edey) has a chance to be one of the best players in the country, he can be an All-American for us,” Painter said.

Furst will likely be called upon to spell Edey on a regular basis. The 7-2 Berg, a big man more in the run-and-jump mold of Matt Haarms than sturdy like Edey, is a wild card. He could claim significant minutes if he’s ready to handle Big Ten physicality.

The Boilermakers are likely to take something of a step back with so much talent going out the door, but leaps by Edey, Newman or Morton could keep them in the hunt in a Big Ten that looks to be weaker than usual. If some of the youngsters are more ready than expected, the Boilers could enjoy the type of ahead-of-schedule season they did in 2020-21.