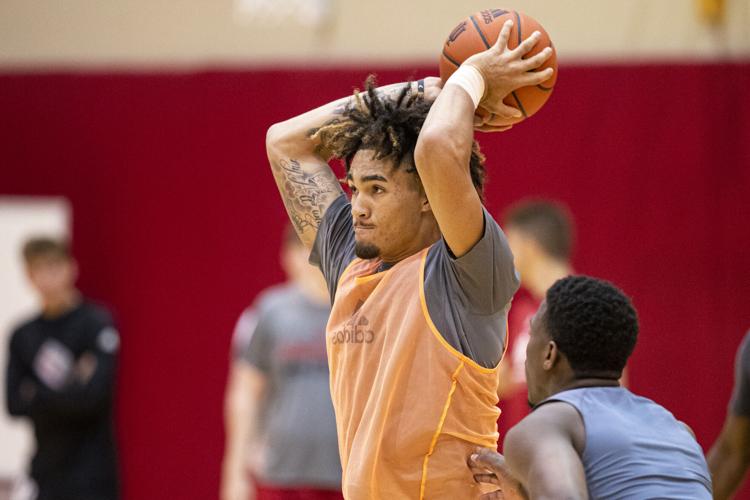 Guard Jalen Hood- Schifino is one of the four highly touted freshman who will play for the Hoosiers next season. 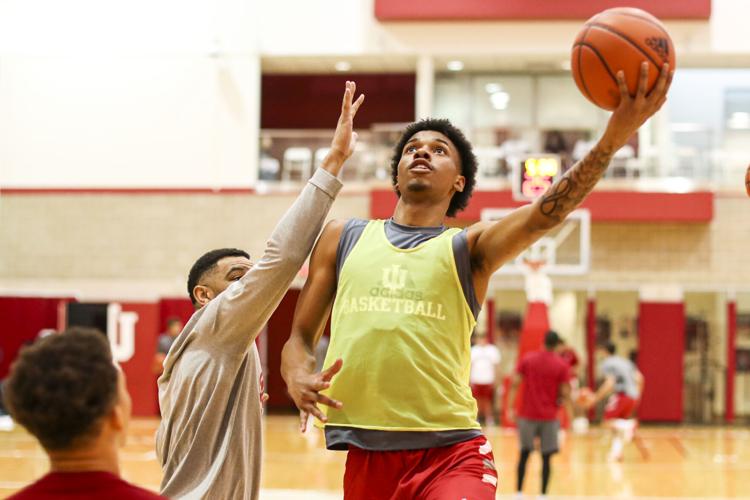 BLOOMINGTON, IN – JUNE 23, 2022 – guard CJ Gunn #11 of the Indiana Hoosiers during practice Cook Hall in Bloomington, IN. Photo By Andrew Mascharka/Indiana Athletics

Guard Jalen Hood- Schifino is one of the four highly touted freshman who will play for the Hoosiers next season.

BLOOMINGTON, IN – JUNE 23, 2022 – guard CJ Gunn #11 of the Indiana Hoosiers during practice Cook Hall in Bloomington, IN. Photo By Andrew Mascharka/Indiana Athletics

Indiana has had highly regarded freshman classes before. In 2018, for example, the Hoosiers brought in Indiana high school legend Romeo Langford and national top-60 recruit Jerome Hunter in a class that ranked No. 10 in the country.

But the freshman that season were supposed to be among the best players on a team with high expectations despite returning only Juwan Morgan for significant veteran leadership. Instead, Langford – though he scored 16.5 points per contest – was injured for a chunk of the season, Hunter missed the whole season with a leg injury and the Hoosiers missed the NCAA Tournament.

In the past, the Hoosiers have had more success with top recruiting classes when the incoming youngsters are able to fill complementary roles next to more experienced players. Think 2011-12, when the infusion of five-star center Cody Zeller next to veterans Christian Watford, Verdell Jones and Jordan Hulls pushed the Hoosiers to a surprise Sweet 16, or 2012-13, when five-star point guard Yogi Ferrell slid into the lineup next to eventual NBA lottery picks Zeller and Victor Oladipo and provided enough ball-handling to help the Hoosiers to a Big Ten title.

Indiana might have such a situation on its hands this year, as well. Incoming freshmen Jalen Hood-Schifino, Malik Reneau, Kaleb Banks and CJ Gunn are talented – Hood-Schifino and Reneau are the first pair of top-30 recruits ever to sign with the Hoosiers in the same class and the class as a whole ranks eighth nationally, according to 247 Sports – but the group isn’t expected to carry the Hoosiers this season.

They can spend their time learning from returning stars Trayce Jackson-Davis, Race Thompson and Xavier Johnson and fill in any gaps that exist on the roster. On paper, it’s the ideal situation for the present and future of the program.

“We all play with a little toughness and chip on our shoulder, which is great, especially when you’re competing against the older guys and I feel like we do a great job of really competing,” Reneau said of the incoming class, which arrived in Bloomington in June. “That’s the biggest goal, we need to compete.”

Of the four players in coach Mike Woodson’s first recruiting class, only Hood-Schifino, a five-star guard and the No. 22 player in the country, is expected to press for a starting role. The Montverde Academy product is a candidate to play the point, with Johnson sliding over from the point guard spot he played last season into more of a score-first role.

The 6-foot-4, 210-pound Schifino has the physical maturity and competitiveness to play immediately and believes his game fits well next to Johnson. Having two high-level ball-handlers in the backcourt paired with two talented big men in Jackson-Davis and Thompson will multiply Indiana’s options in the pick-and-roll game Woodson loves to run.

“The way (Johnson) wants to play fits my game perfect,” said Hood-Schifino, who has known Johnson since the older player was suiting up for Pittsburgh and the youngster was growing up in the Steel City. “He wants to play fast, get the ball out. For me, playing alongside Xavier Johnson that would be great. I think we both complement each other’s games pretty well.”

Hood-Schifino likely has the court vision and ball-handling to play right away, meaning a starting spot could hinge on how well he handles himself defensively. He’s been preparing for that challenge since he was playing in his grandparents’ backyard as a child and taking on his older, more physically mature cousins.

“I’m just very competitive and I hate for somebody to ever say they got the best of me,” said Hood-Schifino, who mentioned Jason Kidd as one of the primary influences on his game. “When I was younger, (my cousins) used to bully me, so I always took it to heart. As I grew up, I always wanted to be the best defender and make sure no one ever got the best of me.”

Reneau was Hood-Schifino’s teammate at Montverde and Hood-Schifino was with him when the forward decommitted from Florida in March. The point guard made sure Indiana pursued his teammate, the No. 28 player in the country, and the Hoosiers landed a player who should be an important depth piece behind Jackson-Davis and Thompson this season.

The native of Hialeah Gardens, Florida, has played power forward and center in practice and could be the primary backup at both positions entering the season, depending on the development of sophomore center Logan Duncomb. He has a polished offensive game, but he is not a super athlete and has had to work to diversify his toolbox of moves while facing a pair of All-Big Ten big men in practice.

Thompson noted Reneau hit a “pretty nasty” 1-foot fadeaway in a recent workout and Euro-stepped past a couple of defenders in another scrimmage.

“It’s hard to bump bodies with Race and Trayce because they are all solid and it’s not easy to move them,” the 6-8 Reneau said. “So, I have to find different moves or get past them with speed and not just overpower them and that’s where I found a big difference and from high school and from college. I feel like it’s more a finesse game and not just trying to back down your man.”

Working with Thompson and Jackson-Davis this season could pay dividends for Reneau when the veterans are gone in 2023-24 and he may be Indiana’s top big man. Jackson-Davis said he plans to ensure Reneau gets everything he can out of the season.

“The thing with (Reneau), he’s a winner, so that’s great,” the 15th-leading scorer in IU history said. “I’m going to take him under my wing this summer and get to work and play with him, play against him. … But I expect (him) to be ready to play.”

Banks and Gunn are not expected to play quite as many minutes from the outset as their freshman counterparts, but both have skills that may make it difficult to keep them off the court. Banks will compete for playing time at small forward with burgeoning star Jordan Geronimo and veteran Miller Kopp and could provide an athletic spark off the bench. He’s already gained 15 pounds of muscle since arriving on campus.

Gunn, the only in-state recruit in the class, brings the one ability the Hoosiers don’t, on paper, have in spades: outside shooting. Like Hood-Schifino, the Indianapolis native’s playing time may rest on his ability to play defense at a Big Ten level, but the Hoosiers desperately need a knock-down 3-point shooter. Gunn says he can be that player.

“I think I’ve set myself up to be that shooter,” Gunn said. “I’m going to continue to put in the work so you can see it translate on the floor later this year.

“I’ve just been working on just keeping the same form and just keeping consistent. It’s all about knocking it down on the next level, and it’s translated.”

While the Hoosiers have plenty of talented experience on the roster, Woodson has pushed his newest players this offseason, impressing upon them the need to “speed up the process” so they are ready to contribute for a team with Big Ten championship hopes. The older players on the team have been excited by what they’ve seen so far.

“I think that we’ve got something special with all the freshmen coming in,” Thompson said.