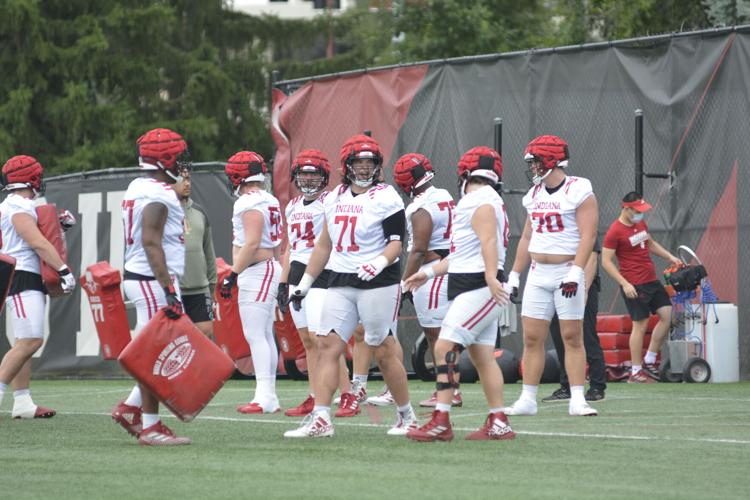 Indiana offensive lineman Randy Holtz (71), a Snider graduate, runs through a drill Tuesday during the first practice of the Hoosiers’ fall camp in Bloomington. 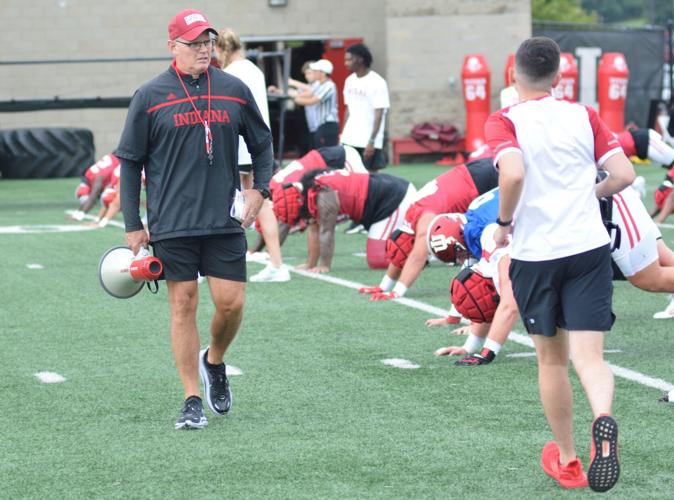 Indiana coach Tom Allen encourages his team during warmups Tuesday during the first practice of the Hoosiers' fall camp in Bloomington. 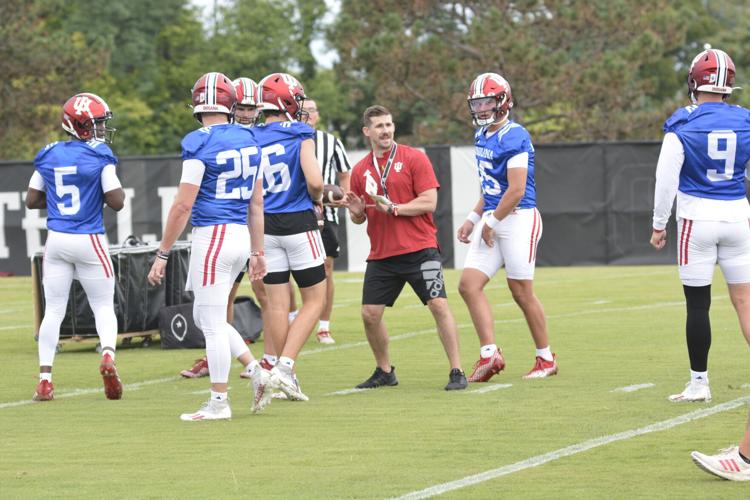 Indiana offensive lineman Randy Holtz (71), a Snider graduate, runs through a drill Tuesday during the first practice of the Hoosiers’ fall camp in Bloomington.

Indiana coach Tom Allen encourages his team during warmups Tuesday during the first practice of the Hoosiers' fall camp in Bloomington.

BLOOMINGTON – With a siren blast from his bullhorn early Tuesday morning, Tom Allen signaled the start of the first official practice of his sixth season at Indiana. He knows it has to be different from the fifth year, when the Hoosiers went 2-10 and 0-9 in Big Ten play.

To that end, Allen flew around the IU practice fields cajoling, imploring, encouraging and pushing a team in which he is trying to instill a new tenacity. Within 15 minutes of the start of practice, Allen’s voice began to crack. By the end of the workout, he was nearly hoarse.

“The urgency, the attention to detail, how we walk,” Allen said of what he’s emphasizing this fall. “Player practices over the summer are good, but (the coaches are) not there. And so I promise you, it’s not the same. Especially in regards to urgency in between the reps, transition from one thing to the next, and how you walk-through. To me, I just want to set that tone for everything we do.

“The tempo, hustle, the execution, the attention to detail. Yes, it’s heightened for sure. It’s going to be the same way tomorrow until we get it just totally ingrained in them.”

Allen is less worried about infusing urgency in the returning players, whom he believes are committed to the project of building the program back after a difficult season last year. The coach is more focused on making sure the newcomers to the program – the highly-touted freshman class and the team’s 13 transfers – get acclimated to his expectations. He noted the first practice can be a “culture shock” for the freshmen who didn’t get to campus until June, and he saw some of that “in their eyes” Monday.

There were some youngsters who were somewhat ahead of the curve, however. Among those Allen highlighted from that group was Kam Perry, a 5-foot-9 wide receiver from Marietta, Georgia, who Allen said “made some catches today; Has really good burst to him and really has great acceleration.”

The Hoosiers could use some help at receiver after losing top pass-catchers Ty Fryfogle and Peyton Hendershot to the professional ranks after last season.

On defense, where Allen is calling plays again this season after ceding those duties starting in 2019, he was impressed by freshmen defensive linemen Venson Sneed and Nick James, the latter a 295-pound four-star recruit from Bradenton, Florida.

“They don’t look like freshmen the way they move and do things,” Allen said.

Indiana could rely on the youngsters to bolster a somewhat thin defensive front. The Hoosier coach emphasized he will not hesitate to play the newer players if they prove to be ready; this year’s camp is more wide-open at more positions than any other in recent memory.

“It’s going to be important, these next several weeks are big for them,” Allen said of the freshmen. “Freshman or not, I don’t care what grade you’re in, it’s your responsibility to prove to your coach you deserve to play. That’s in practice, in meetings, in walk-through, and everything we do. I want those freshmen to figure that out and respond.

“We got a lot of guys here that need to step up and contribute and help this team, especially in 2022.”

Tuesday was also the first practice for a pair of new Hoosier coordinators: Walt Bell on offense and Chad Wilt on defense. While Allen will call the defensive plays – Wilt will lead the defensive meetings, allowing the head coach to bounce around to the offensive meetings as well – the offense will be Bell’s.

The former Florida State offensive coordinator and Massachusetts head coach likes to play an up-tempo style, and Allen said the Hoosiers plan to use a lot of players to keep everyone fresh while maintaining a brisk pace.

That could make depth particularly important on the offensive line, where there is a distinct Fort Wayne flavor. Four Hoosiers linemen hail from the Summit City: Snider grads Randy Holtz and DJ Moore and Bishop Dwenger’s Luke Wiginton and Vinny Fiacable. Holtz and Fiacable appear closest to the rotation, but all will likely get opportunities.

Transfer quarterback Connor Bazelak throws a nice deep ball. … Converted quarterback Donaven McCulley looks the part at wide receiver. He’s 6-5, 210 pounds. … Speedy slot receiver and return man DJ Matthews Jr. looked healthy after tearing his ACL last season and missing most of the year. He played with a knee brace, but moved fluidly. … Allen discussed recruiting and said this year’s class will be small, with likely only 12-15 signees as the Hoosiers cycle through players taking advantage of the extra year permitted by the NCAA during the coronavirus pandemic.